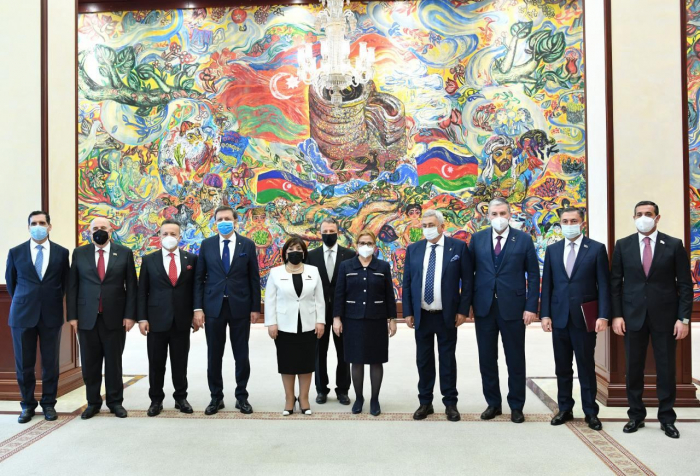 Chair of the Azerbaijani Milli Majlis (Parlament) Sahiba Gafarova met with the delegation led by the Minister of Trade of the Republic of Turkey Ruhsar Pekcan on April, 2, AzVision.az reports.

Welcoming the guests cordially, Gafarova said she was certain that the delegation's visit would make another contribution to the ongoing intensification of the relations between Azerbaijan and Turkey.

She also put emphasis on how brotherly Turkey had stood by Azerbaijan’s side bringing on both political and moral support throughout the 44-day long Second Karabakh war, and how Azerbaijan appreciated that support. In her words, the arrivals of the Turkish Parliament’s delegations of various statures and their first-hand acquaintance with the situations in the areas subjected to Armenian aggression during the Patriotic War came as the embodiment of the ‘one nation – two states’ principle voiced by the Great Leader Heydar Aliyev.

It was said at the meeting also that bilateral economic relations were on the rise, too, as can be seen from both the volume of trade and the new goals being set. The oil, gas and transport projects implemented by Azerbaijan and Turkey jointly let the two countries to play greater roles in the region now.

Gafarova then said that the activities of the extended friendship groups in the parliaments of both Azerbaijan and Turkey were compliant with the overall spirit of the bilateral co-operation while the regular meetings of our MPs at various international venues mattered for the discussion of the topics of interest to both sides.

Thanking for the warm welcome, Minister of Trade of Turkey Ruhsar Pekcan expressed her satisfaction both with the visit and the meetings held during it. She said the delegation had had the conversations aimed at the further expansion of the bilateral co-operation in her area of ministerial responsibility, adding that the Turkish people had been exhilarated by Azerbaijan’s victory in the Patriotic War.

As was remarked then, Turkish companies intend to become heavily involved in the restoration work done and to be done in the de-occupied provinces as well as to invest in various sectors of the Azerbaijani economy. What with it being a strategic ally to Azerbaijan, Turkey is always by Azerbaijan’s side and will not leave the brotherly Azerbaijani nation without its support from now on, either, according to the Turkish minister.