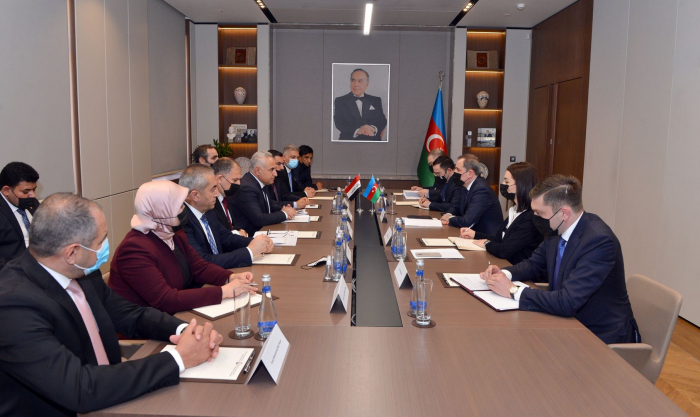 On April 5, Azerbaijani Foreign Minister Jeyhun Bayramov received a delegation led by Head of the foreign relations committee of Iraq’s Parliament Sherko Muhammad Mir Vais, who is on a visit to Baku, the Foreign Ministry told AzVision.az.

Greeting the guests, Bayramov noted that relations between the two countries are developing on the basis of historical, cultural and religious ties, cooperation is carried out both in bilateral and multilateral formats.

Head of the Iraqi Parliament committee, in turn, noted that Azerbaijan is supporting Iraq at the international level, stressing that Iraq has always been guided by the principles of international law in the settlement of conflicts.

Expressing gratitude to the Iraqi side for the constant support of the territorial integrity of Azerbaijan, Bayramov informed the members of the delegation about the destruction, illegal activities, numerous war crimes committed by Armenia during the 30-year occupation of Azerbaijani lands, the new situation in the region after the 44-day Second Karabakh War.

“Armenia, during the occupation, planted mines on Azerbaijani lands and still has not provided the Azerbaijani side with maps of minefields, despite the cessation of hostilities. Thus, Armenia continues to grossly violate international humanitarian law,” the minister noted.

In the course of the meeting, the FM noted that the world community must put pressure on Armenia in this regard.

The parties also exchanged views on the prospects for the development of relations between Azerbaijan and Iraq, including the possibilities of expanding cooperation in the humanitarian, tourism, educational and other spheres.