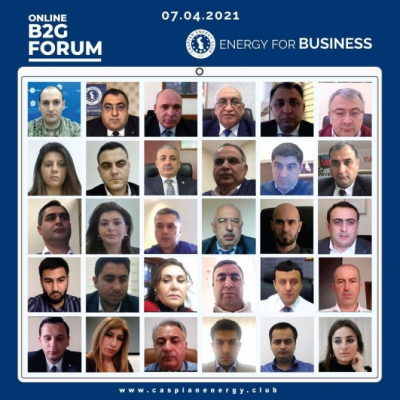 The event began with a minute of silence in memory of the martyrs who fell in the struggle for the territorial integrity of Azerbaijan.

Then Elvin Huseynov gave detailed information about the goals of creation and lines of activity of the "YAŞAT" Foundation. It was noted that the Foundation was created to support provisions for the victims and families of martyrs who fell in the struggle for the territorial integrity of the Republic of Azerbaijan.

Telman Aliyev called on the companies to support the “YAŞAT” Foundation as actively as possible. He noted that in addition to donations made to the foundation, companies should also provide moral support to the families of martyrs and the Karabakh war veterans.

Then Elvin Huseynov answered the questions of the Online B2G Forum participants. Telman Aliyev thanked Elvin Huseynov for the open and sincere dialogue. He also proposed to create a joint bilateral working group between the "YAŞAT" Foundation and the Caspian Energy Club. Within the framework of the working group, each member of the Caspian Energy Club, depending on the field of activity, will assist in renovation of apartments and houses of families of martyrs and veterans of the Karabakh war, and will also help with food products supply, medicines, clothing, etc.