President Aliyev comments on reconciliation with Armenia in post-conflict process 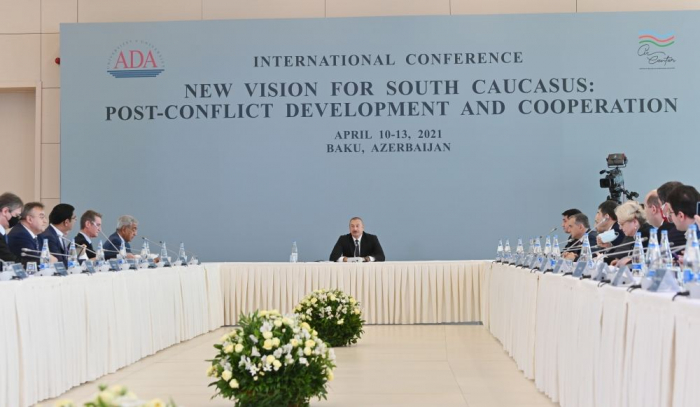 If we're talking about the post-conflict situation, we need to focus on some elements, which can lead to future reconciliation [with Armenia], Azerbaijani President Ilham Aliyev said during his speech at the ‘A New Look at the South Caucasus: Post-Conflict Development and Cooperation’ conference at ADA University in Baku on April 13, 2021, AzVision.az reports.

“However, there has been such a long period of a deliberate policy of demonization of Azerbaijan, inventing stories, presenting Azerbaijanis as enemies, as those ‘who occupied Armenia or occupied Karabakh’,” the president said.

“So, it will probably take time for society to understand, not only during the war but even after it, what we've done. We returned more than 1,500 dead bodies of Armenian soldiers. We're still participating together with Russian peacekeepers in this searching operations,” President Ilham Aliyev added.

“I can tell you than during the first Karabakh war, we had almost 4,000 missing soldiers. None of them was returned. None of them. So this is the difference,” the head of state noted.