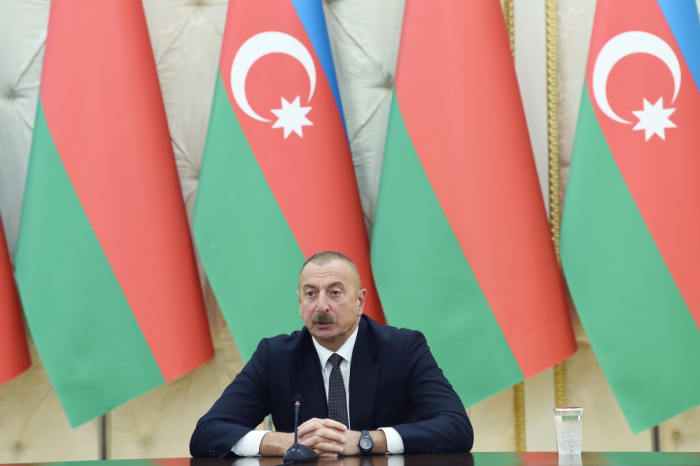 The Zangazur corridor is becoming a reality, Azerbaijani President Ilham Aliyev said in a press statement following a meeting with his Belarusian counterpart Alexander Lukashenko in Baku on Wednesday, AzVision.az reports.

The head of state said the situation with post-conflict development can be considered to be positive as a whole.

“I informed my Belarusian counterpart about our approaches to post-conflict development and our vision of it. I stated Azerbaijan’s position that we  believe, and the reality is, the Nagorno-Karabakh conflict has already been resolved,” he said.

The Azerbaijani leader said the UNSC resolutions had remained on paper for 27 years, and unfortunately, the mechanism for their implementation had not been launched.

President Aliyev noted that the culprit of what happened to Armenia is the Armenian leadership, which has been pushing the country into an abyss for 20 years.

The head of state once again emphasized that the second Karabakh war ended with a humiliating defeat and complete destruction of the Armenian army.

President Aliyev said today Azerbaijan is focused on reinforcing confidence-building measures, as well as on transport and logistics projects, which are currently being discussed by a trilateral working group at the level of Azerbaijani, Armenian, Russian deputy prime ministers and within the framework of the consultations with neighboring countries – Turkey and Iran.

“Thus, the Zangazur corridor is becoming a reality. We hope for multilateral cooperation,” he added.