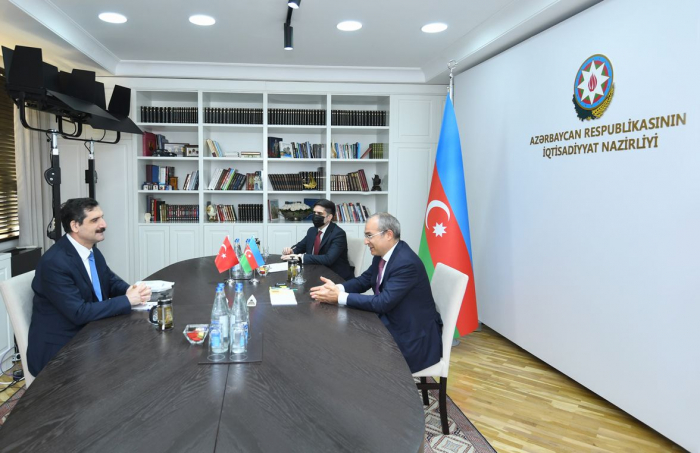 Turkey is a leader among the countries investing in Azerbaijan's non-oil sector, Azerbaijani Minister of Economy Mikayil Jabbarov said.

Jabbarov made the remark at a meeting with Turkish ambassador Erkan Ozoral, whose diplomatic term in Azerbaijan has come to an end, AzVision.az reports on April 15 with reference to the Ministry of Economy.

The minister stressed the fruitful activity of the ambassador to Azerbaijan and wished him success in his future activities.

Jabbarov said that the Azerbaijan-Turkey relations are developing well and today they have reached the peak.

The minister also stressed the strong political and moral support rendered by Turkey to Azerbaijan during the 44-day second Armenia-Azerbaijan Nagorno-Karabakh war.

“The political will of the presidents of the two countries plays an important role in the development of bilateral cooperation,” the minister said.

While speaking about the development of trade and economic relations between the two countries, the minister stressed that Turkey is one of the main trade partners of Azerbaijan.

“The preferential trade agreement signed between the governments of Azerbaijan and Turkey will contribute to the expansion of bilateral trade ties,” Jabbarov said. “The number of the Turkish companies operating in Azerbaijan is growing.”

Jabbarov stressed the existence of ample opportunities for the participation of the Turkish companies in the restoration and construction work in the liberated territories of Azerbaijan.

In turn, Ozoral, expressing gratification with his activity in Azerbaijan, stressed the existence of friendly and fraternal relations between the two countries, strategic partnership.

The ambassador stressed that he is proud that he was the Turkish ambassador to Baku during the second Nagorno-Karabakh War, which ended with the historic victory of Azerbaijan.