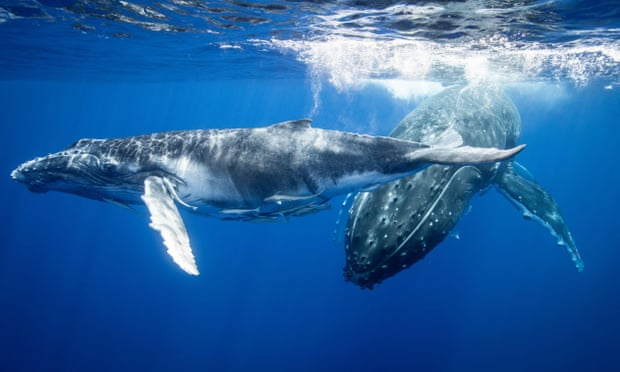 The Covid-19 lockdown has produced the quietest year for the world’s oceans in recent memory, according to a group of scientists working on a global map of underwater soundscapes, AzVision.az reports citing the Guardian.

They believe the relative hush can provide valuable comparative data for an unplanned experiment in how sound affects whales, coral and other marine species.

Like light pollution on the land, human noise is a growing concern in the oceans because it has been proven to disrupt species that depend on sound for communication and navigation. Low-frequency signals can travel thousands of kilometres.

Studies in the north-east Pacific showed an increase of 3 decibels each decade in human-generated sounds below 100 hertz between the 1960s and early 2000s. By one reckoning, the volume of this audio pollution is now around the same level as the natural background noise of the ocean.

This faded substantially last year at the height of lockdown in March, April and May, starting – like Covid – around China and then spreading worldwide. The volume surged back to a new height in the summer as shipping companies rushed to make up for lost time. Sound levels have now stabilised close to the average for recent years.

Scientists have retrospectively declared 2020 “the year of the quiet ocean” and the data from this exceptional period will be published in the coming months in scientific journals.

“Be prepared for exciting results,” said Jesse Ausubel, the director of the Program for the Human Environment at the Rockefeller University. The oceans are unlikely to be as quiet as during April 2020 for many decades to come.

The softening of human sound was most evident in coastal areas and shipping lanes. Jennifer Miksis-Olds, the director of the Center for Acoustics Research and Education at the University of New Hampshire, said this created conditions for a “natural experiment. Since the Industrial Revolution, she said, human noise has masked the ambient sounds of wind, waves and ice and forced marine life to adapt in a similar way to customers in a noisy restaurant, who have to raise their voices or repeat themselves to be understood.

This is part of a bigger project. Ausubel is the founder of the International Quiet Ocean Experiment, a 10-year plan launched in 2015 to create a time series of measurements of ambient sound in many ocean locations. Part of the goal is create evidence to persuade ship operators, oil and gas facilities and jetski users to dampen their decibels for the sake of marine ecosystems.

“We’d like the word soundscape to become a lot better known. Sound is light in the oceans. It illuminates the ocean for many animals. They use it to communicate, to hunt, and can be harmed by noise at excess,” Ausubel said.

He and colleagues – including specialists at St Andrews – plan to expand the hydrophone network, particularly in the southern hemisphere, to more than 500 devices. Using modelling and data collaborations with shipping companies and other ocean users, they hope to produce a global map of ocean sound within the coming years. This should reveal important patterns, such as increases in noise along shipping lanes and near oilfields and windfarms, which could prove as important for ocean health and regulation as roadside air pollution monitoring, or water-contamination measurements near factories.

There is a long way to go. Currently, there are relatively detailed soundscapes of busy areas, such as the North Sea, and then piecemeal, one-off studies from other regions. Filling in the gaps will require a major effort to share data and make reporting consistent across time and place.

Two important steps in this direction were announced this week with the launch of a new software tool, known as Manta (Making Ambient Noise Trends Accessible) and developed by an international team of experts coordinated by Miksis-Olds, to standardise ocean sound recording data. There have also been tests of a new platform to share acoustic data worldwide, the Open Portal to Underwater Sound (Opus), which is being hosted by the Alfred Wegener Institute in Bremerhaven, Germany.

Ausubel compared the recent developments in the soundscape network to the completion of a ring of satellites around the equator in 1979. Back then, there was a party in the World Meteorological Office in Geneva to celebrate the fact that scientists could monitor the entire atmosphere for the first time.

“We are now at the onset of an era in which we can observe ocean soundscapes in much the same way,” he predicted.