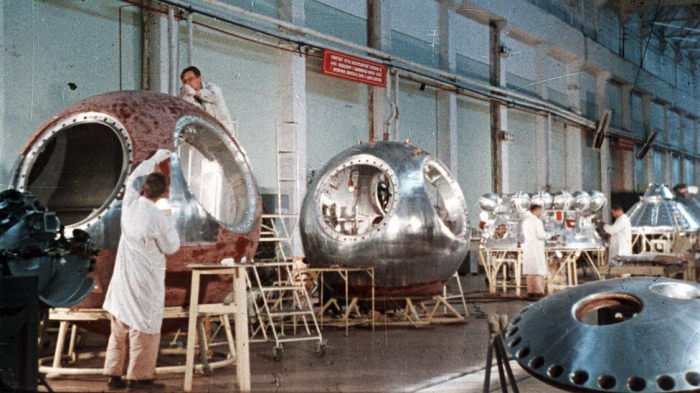 The Soviet Union did not have many of the same technological advances enjoyed by Nasa – but that didn’t stop them leaping ahead of the Americans into space. Here’s how.

Within a few days of returning to Earth, Yuri Gagarin stood alongside Soviet premier Nikita Khrushchev in Moscow’s Red Square to be welcomed by tens of thousands of people cheering his success. It was an overwhelming, and largely spontaneous, a celebration of Soviet achievement.

But the engineer who made the first human spaceflight possible was nowhere to be seen. Only when he died in 1966 was the name of the Chief Designer, Sergei Pavlovich Korolev, revealed to the world. This genius at the heart of the Russian space programme was one of the Soviet Union’s most closely guarded secrets.

Born in Ukraine, Korolev oversaw the design of the vast R7 rocket that launched the first satellite, first dog, first man, first woman and first spacewalker into orbit. He developed the capsules, control systems and rigorous checks that ensured that every person he sent into space during his lifetime came back alive.

The propaganda value alone of his work was enough to guarantee the Soviet Union’s superpower status. But, unlike his famous American rival Wernher von Braun, the identity of the “Chief Designer” was considered too precious to share with the world.

“Not enough credit goes to the engineers and the technicians who worked on the spacecraft, because they're the armies that really made this possible,” says Cathleen Lewis, curator of International Space Programs at the Smithsonian Air and Space Museum in Washington DC. “It takes an incredible amount of energy and effort to preserve human life in space.”

Korolev’s engineers came up with brilliant engineering solutions to the challenges of human spaceflight, often different to those chosen by their American counterparts. Simplicity was sometimes driven by the limitations of Soviet technology.

The R7 launcher, for instance, was designed as an intercontinental ballistic missile. At some 30 metres tall (110ft), and with four boosters strapped to its sides, the rocket’s size was determined by the mass of the nuclear warhead it carried. Because Soviet nuclear weapons were bigger and heavier than their US counterparts, the rockets had to be more powerful. This meant that when it came to launching a spacecraft with a cosmonaut on board, this could be larger too.

“Unlike the Americans, they didn't have to worry about making those leaps of miniaturising or making the technology more compact,” says Lewis. “The American aircraft industry had transitioned from vacuum tubes to transistors, but the Soviets were still using vacuum tubes in their spacecraft up through the mid-1960s.”

The Soviet Vostok capsule that would carry the first man and, later, the first woman into space certainly bore little relation to Nasa’s Mercury spacecraft. Barely larger than the man inside, the cone-shaped Mercury module was crammed with switches and dials, levers and buttons. It was a marvel of electronics and miniaturisation.

Vostok, on the other hand, resembled a giant hollowed-out cannonball lined with padding. There was a radio – which looked like a car radio, with a telegraph key to transmit morse code as a back-up – and a single instrument panel. Mounted within this box was a painted globe of the Earth, its movement controlled by an electro-mechanical computer driven by wheels and cogs. This gave the occupant an indication of their position in orbit.

The absence of complex instrumentation also revealed another fundamental difference between the two nations. US Mercury astronauts were expected to pilot their ships. Vostok operated automatically to a pre-determined sequence, leaving the cosmonaut with little to do. The only way they could release the few manual controls was to punch in a secret code on a keypad. The code was sealed in an envelope beneath the seat, to be opened if the automatic systems failed. Korolev, however, was among several people to whisper the numbers to Gagarin before his flight.

The cannonball design of the Vostok also made a re-entry to the Earth’s atmosphere simpler. Mercury astronauts had to carefully orientate their capsule for the heatshield to protect them. The Vostok, however, was entirely covered in heat-resistant material and was simply weighted at the bottom so it faced in the right direction.

But when it came to landing, the Soviets had a problem. The US planned to splash down in the ocean, but Soviet cosmonauts would return to land.

“They could not slow the Vostok down sufficiently for humans, for anyone, to survive a landing inside the spacecraft,” says Lewis. “And that is why Yuri Gagarin ejected at 20,000ft (6km) and the capsule landed separately.”

For his next spacecraft, Voskhod, Korolev’s engineers designed a ‘soft’ landing system, which included sprung seats for the cosmonauts and a rocket system that would fire just before the capsule hit the ground. Today’s Soyuz spacecraft uses similar technology, although occupants still liken the return to Earth to a high-speed car crash.

The other major innovation with Voskhod was that, despite being no bigger than Vostok, to compete with America’s two-man Gemini spacecraft, it needed to carry more than a single cosmonaut. Three in fact… and one of them would be an engineer that helped design it.

This idea of recruiting engineers, rather than just pilots, to fly in space was another of Korolev’s innovations. It was not adopted by the US until the era of the Space Shuttle.

Twice hero of the Soviet Union, cosmonaut Aleksandr Aleksandrov, would begin his career working on Voskhod in the early 1960s and would later fly Soyuz during two missions to Soviet space stations. When I met him in Moscow, two years ago, he explained Korolev’s thinking.

Cynics might also suggest that having the engineer who conceived the spacecraft also fly it did wonders for quality control. Yet, both of the crewed Voskhod flights were a success – the Soviets flew three men in space in 1964 and the first man to walk in space, Alexei Leonov, during the Voskhod-2 flight in 1965 (although that wasn’t exactly without its own set of problems).

Perhaps Korolev’s most enduring invention, however, was the Soyuz rocket. The launcher used by Russia today appears almost identical to the original R7 and is imbued with Soviet design simplicity. Not least its ignition system.

With five rocket motors and 20 combustion chambers, as well as 12 smaller engines used for steering, it’s essential that all the engines light at the same time. If not, fuel could pour out of an unlit engine and cause a potentially catastrophic explosion.

This synchronicity is achieved by using giant matches. Once the Soyuz is on its launch gantry, engineers place sticks of birch wood with two pyrotechnic electric ignitors on the end into the rocket nozzles. These are bound together with brass wire.

Just before launch, the ignitors fire and the flame burns through the wire. When all the wires are severed it indicates that there is a burning flame within each nozzle and it’s safe to open the propellant valves. The system ensures that fuel is only released when these giant matches are all lit.

Korolev’s house in Moscow – gifted to him (in secret) by the Soviet State in 1959 – is now preserved as a museum. The place is filled with mementoes of the space programme he oversaw – models of aircraft and rockets, photographs of cosmonauts, technical books and papers.

Outside his study, one of the walls is covered in a detailed map of the lunar surface. Korolev’s dreams of landing a Soviet citizen on the Moon were never realised, but his designs live on in today’s rockets, spacecraft and space stations. Sixty years after Yuri Gagarin’s first orbited the Earth, the engineer that kicked off the space race deserves to be celebrated just as widely.