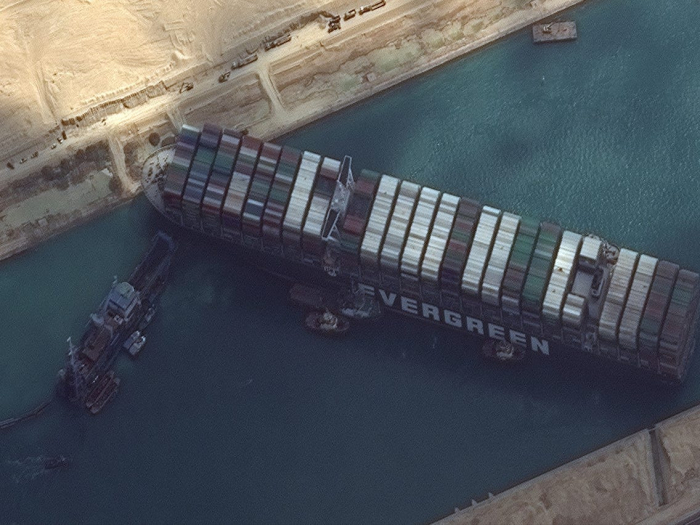 On March 23 of 2021, a container ship called the “Ever Given” ran aground in Suez Canal, one of the most important waterways in the world, and blocked other vessels from using it.

This human-made waterway is one of the world’s most heavily used shipping lanes, carrying over 12% of world trade. This canal is also responsible for the transportation of 7% of the world’s oil and 30% of daily container shipments.  Therefore, the blockage of the canal has considerably affected global trade.  According to Lloyd’s List, a London-based shipping news journal, the estimated daily value of cargos passing through the canal is $9.7 billion, with $5.1 billion travelling westward and $4.6 billion travelling to eastward directions. The incident forced some ships to use the alternative route around Africa’s southern tip, which is dangerous and increases the transportation costs and time.

Shipment delays because of the incident in the Suez Canal also negatively affected the already-disrupted global supply chain. Since the start of the pandemic, shipping delays and shortages have considerably strained the global supply chain. As the commodities become increasingly difficult to obtain and produce for the companies, customers face limited options and higher prices. Several big companies such as Nike, Honda, and Samsung have already expressed that supply-chain issues have significantly impeded production volumes. Thus, the blockage of the canal made the supply chain crisis even worse.

Almost a week after the “Ever Given” halted the canal, on March 29, it became possible to free the vessel and the Suez Canal opened for business again; tugboats managed to refloat the stuck vessel away from the canal’s sandy bank. During the blockage, at least 367 vessels were left waiting for the canal to be unblocked. However, it remains unclear when the traffic in the canal will return to normal, as it will take a couple of days to clear the backlog of ships. Some experts have estimated that it could take more than 10 days.

Despite the fact that the canal was freed, it has raised questions on the risks of the world’s overreliance on this route. The economic damage of the blockade of the Suez Canal proved the fragility of global transportation architecture. This in turn brought up the issue of the development of alternative land or maritime transport routes. Hence, after the incident, Russia and Iran have called for the need to find alternative shipping routes, especially recalling potentials of the Northern Sea Route (NSR) and International North-South Transport Corridor (INST). By explaining the reasons for considering the NSR, on its official social media account Russian state company Rosatomflot declared that rapid melting of the Arctic and the existence of powerful Russian icebreakers improve the accessibility of the North Sea, which could become an alternative to the Suez Canal. Iranian officials, on other hand, called for the activation of the INSTC as a reliable and “low risk” alternative.

The other alternative route that has the potential to become one of the mainland routes for the transportation of goods between Asia and Europe is the Trans-Caspian East-West-Middle Corridor Initiative, shortly called “The Middle Corridor”. This corridor is considered one of the most important routes in reviving the ancient Silk Road. The Middle Corridor begins in Turkey, passes through the territories of Azerbaijan and Georgia, crosses the Caspian Sea, reaches Central Asia, and extends to China through the Turkmenistan-Uzbekistan-Kyrgyzstan or Kazakhstan routes.

The formation and development of the Middle Corridor began after November of2013, when as a part of the II International Transport and Logistics Business Forum “New Silk Road” in Astana, the leaders of JSC “National Company” of Kazakhstan, CJSC “Azerbaijan Railways” and JSC “Georgian Railway” signed the agreement on the establishment of Coordination Committee for the development of the Trans-Caspian International Transport Route. In December 2016, the participants of the Coordinating Committee decided to establish the International Association” Trans-Caspian International Transport Route”, which started its activities in the following year. The main goal of this project is to increase the volume of freight transportation between East Asia, Central Asia, the Caspian and Black Sea basins and European countries by creating alternative or complement to the traditional land routes that go through the territory of Russia.

Middle Corridor has several advantages in comparison to traditional transportation routes. Compared with the Trans-Siberian Railway, which is also called the “Northern Corridor”, it is 2 thousand km shorter and has more favourable climate conditions. Compared with the traditional sea route, it shortens the travel time of goods between Europe and China by about three times, making it only 15 days. In 2015, the first pilot shipment took place and a container train, which started its trip from Western China reached Baku through Kazakhstan and the Caspian Sea in 6 days. Besides, the Middle Corridor creates great opportunities for cargo transportation within Asia and to Africa. Using this corridor, cargos from the east and south-east Asia could be easily transported to the Middle East, North Africa and the Mediterranean regions using port infrastructures of participating states.

Orkhan Baghirov is a leading research fellow in Baku based think tank named Center of Analysis of International Relations. He is a PhD candidate in Public finance and fiscal policy. His areas of research include regional and international economic relations.

Read the original article on moderndiplomacy.eu.