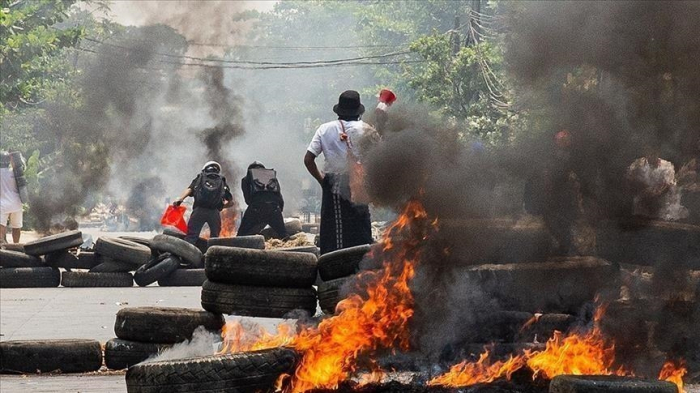 At least 739 people have been killed so far as Myanmar’s military continues to use brutal methods to quell anti-coup protests, a local monitoring group said, AzVision.az reports citing Anadolu Agency.

One more person was killed in Myaung Township in Sagaing Region on Tuesday, the Assistance Association for Political Prisoners (AAPP) said in its latest update.

As of April 21, a total of 3,331 people remain under detention, with 76 of them having been sentenced.

Arrest warrants have been issued for 1,059 more people since the Myanmar army – officially known as the Tatmadaw – seized power on Feb. 1, ousting the elected government of Aung San Suu Kyi.

Among those evading arrest are 20 people who have been sentenced to death and 14 who face three years in jail with hard labor, according to the AAPP.

The group also rejected the Myanmar military’s accusation that it was inflating the death toll.

“On 19 April, around 8pm, the junta operated MWD and MRTV outlets announced AAPP is fabricating and exaggerating the list of protesters killed by the junta in crackdowns,” read a separate AAPP statement.

“These claims lack any evidence, whereas our fatality lists are rigorously verified and trusted.”

The group said its data was “unanimously” trusted and cited by the UN, international non-profits, governments, and media the world over.

“AAPP has accurately verified the known fatalities by a junta who alleged to have only killed 240 people. They are identified dead bodies – shot to the head, tortured, burnt alive, beaten to death, tied up and dragged along on motorbikes – perpetrated by junta troops in police, soldier, or civilian clothes,” read the statement.

It said the “unsubstantiated accusations” were aimed at discrediting the AAPP and part of the junta’s bid to “avoid accountability.”

“We have compiled a comprehensive list of the deaths. In fact, the number is believed to be higher than the recorded list, because there are many cases where we have no information,” said U San Min, head of the group’s documentation and research department.

“We are already consolidating our data with video and photographic evidence in case any problem occurs.”