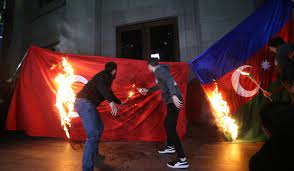 Yesterday once again Armenia separatists put flags of Azerbaijan and Turkey's at the fire which showed the real face of fascist Armenia which inflicted with a historic defeat in the 44 days patriotic against the Azerbaijan war and had has been indulged in series of genocides against innocent and helpless Azerbijan people. Armenians must not forget that Khankendi is only situated 2 kilometres away from newly liberated areas of the Nagorno-Karabakh region so please do not check the patience limits of Azerbaijan troops, common people and the government alike.

I must uphold that the Flags of Azerbaijan and Turkey reflect the collective patriotism, compassion, love and respect which should not be violated at any cost. Flags demonstrate high levels of sacrifices, determination and passions of protection so Armenia should not play with the fire because peace is more valuable than conflict, conspiracy and confrontation.

On the other hand, US president Biden indicated to recognize the so-called Armenia Genocide. The West and especially the US must come out of their self-inserted and fabricated notions of Armenian genocides because Armenia itself has had been indulged in the severer ethnic cleansing and genocides of innocent and helpless Azerbaijan people and other communities alike. It seems to be the start of Round Second of the West and Armenia dissemination of twisting the historic facts and distortion of bitter realities.

Moreover, Azerbaijan’s history is a vivid reflection of pure and courageous martyrdom which is an everlasting human trait and custodian of national sovereignty and territorial claims. So, Armenian people should stay away from these provocations.

On behalf of the Centre of Global & Strategic Studies (CGSS) Islamabad Pakistan we strongly condemn this provocation of Armenia to tarnish the peace agreement.

Dr Mehmood Ul Hassan Khan is a Member Board of Experts, CGSS Islamabad.