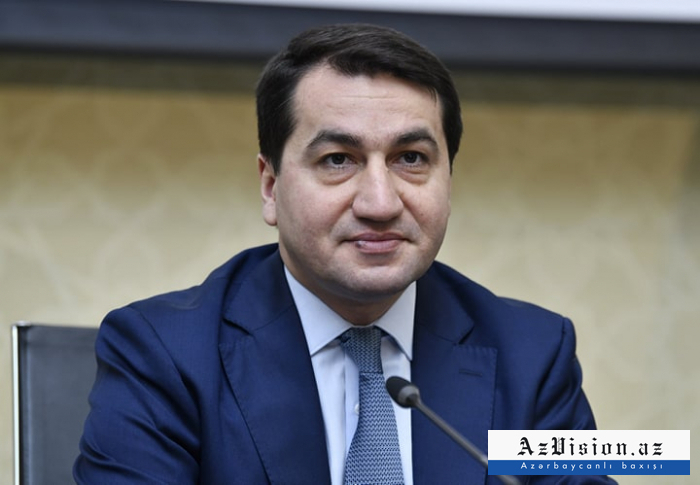 Turkey is a brotherly country of Azerbaijan and Israel is Azerbaijan’s strategic partner, Israel Hayom newspaper cited Hikmet Hajiyev, Assistant to the President of Azerbaijan, Head of Foreign Policy Affairs Department of the Presidential Administration, as saying.

“We want our friends to be friends with each other,” Hajiyev said.

In his article, author Dean Shmuel Elmas said bilateral relations between Israel and Azerbaijan have upgraded significantly over the past year.

“The process that saw the countries' security, economic and social ties steadily improve ever since Azerbaijan declared independence in 1991 came to a head during the 2020 Nagorno-Karabakh War, in which Azerbaijan secured a resounding victory,” he wrote.

He continued: “Hajiyev, who was born in the city of Ganja – the country's second-largest city that came under enemy bombardment during the war – left the safety of his office once the war began to visit civilians across the country to boost their morale.”

In a special interview with Israel Hayom, Hajiyev discussed his immense admiration for Israel and its citizens, noting that Baku deems Israeli-Turkish rapprochement as highly important.

"Our relationship is not predicated on words. It is strategic. We understand one another. I think the backbone of the relationship is actually the connection between the peoples. Israeli-Azerbaijani relations are built on honest historic understanding. There have been many attempts to harm our cooperation, even though good relations with Azerbaijan are an interest of the Jewish people across the globe."

A main issue for the Azerbaijanis is the Biden administration's decision to recognize the so-called “Armenian genocide”. On this matter, Hajiyev's position is unequivocal. "If this is a historic mistake. Nothing can be compared to the Holocaust."

Q: Are you in contact with the Jewish lobby in Washington?

Our relations with Israel are excellent, in all fields. At the same time, Israeli-Azerbaijani relations are also founded on the friendship between the Jewish people and the Azeri people. For us, there's no such term as lobby; Jews living in the US are friends of Azerbaijan and our friendship is based on the same friendship with Jews as everywhere else in the world.

Jewish organizations in the US are a great help to us in conveying Azerbaijan's message – which is that we are trying to build new areas of cooperation in the region, peace and stability in the southern Caucasus. In Azerbaijan, different cultures and religions have lived together for many years. We are proud to see Jews living in Azerbaijan and the Jews across the globe help us.

When Israelis come to Azerbaijan they see the message of peace and there are Israeli flags all over the country. This came from the heart of the people in Azerbaijan and expresses the appreciation for the value of the relationship between the countries. We have excellent understandings and wonderful diplomatic ties. Israel was among the first to recognize Azerbaijan when we declared independence.

One of the events that deeply impacted the Azerbaijani people, beyond just the government in Baku, was the delegation of Israeli eye doctors who went to Azerbaijan to treat the casualties of the First Nagorno-Karabakh War.

"I was grateful," said. Hajiyev. "They came to Azerbaijan, even though they were obviously busy back home, and performed 10-15 surgeries per day. This is the reverence the Jewish people have for life and this concern is part of the Jewish DNA. It relates to the Jewish desire to help. We intend to implement other similar initiatives and we use Israel's experience to help our wounded."

Q: Do you intend to incorporate Israeli companies in the rehabilitation of Karabakh?

Q: To summarize, what message do you want to send Israel?

"I want to wish Israel peace and convey my belief that the Azeri and Israeli peoples are historical friends. The Israeli people have always suffered due to not having peace. We wish them peace and ongoing Israeli success. The start-up nation is our friend and I wish it tremendous success."