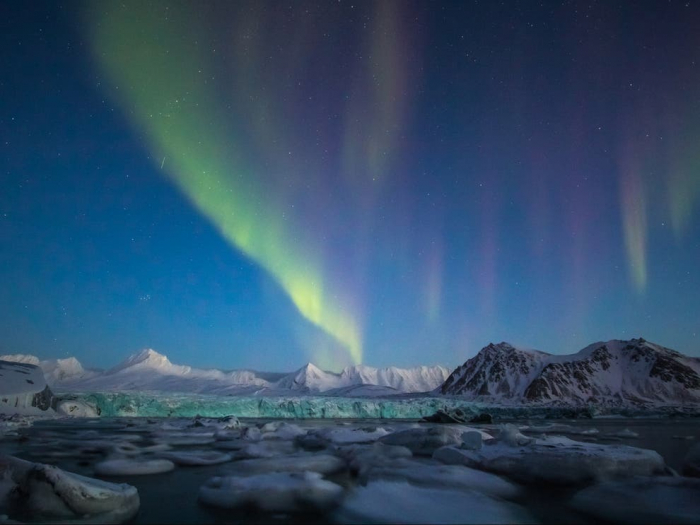 No. The locations of the North and South Poles aren’t static, and due to the climate crisis, they are moving around more than ever, scientists have said.

This can have small impacts on how long our days and nights are, though the fluctuations are so small the changes are imperceptible.

Scientists don’t fully understand what drives this movement, but they do know the way water is distributed on the Earth’s surface is one key factor which can affect the process, which is known as “polar wander” or “polar drift”.

New research reveals that melting glaciers redistributed enough water to cause the direction of polar wander to turn and accelerate eastwards during the mid-1990s.

“The faster ice melting under global warming was the most likely cause of the directional change of the polar drift in the 1990s,” said Shanshan Deng, a researcher at the Institute of Geographic Sciences and Natural Resources Research at the Chinese Academy of Sciences, and an author of the new study.

Vincent Humphrey, a climate scientist at the University of Zurich who was not involved in the study, explained how the Earth spins around an axis a bit like a spinning top.

He said if the weight of a spinning top is moved around, the top would start to lean and wobble as its rotational axis changes.

The same thing happens to the Earth as weight is shifted from one area to another.

Researchers have been able to determine the causes of polar drifts since 2002, based on data from the Gravity Recovery and Climate Experiment (Grace), a joint mission by NASA and the German Aerospace Centre, launched with twin satellites that year and a follow up mission in 2018.

The mission gathered information on how mass is distributed around the planet by measuring uneven changes in gravity at different points.

Previous studies have also revealed that more recent movements of the North Pole away from Canada and toward Russia to be caused by factors like molten iron in the Earth’s outer core.

Other shifts have been caused in part by what is called the terrestrial water storage change - the process by which all the water on land, including frozen water in glaciers and groundwater stored under our continents, is being lost through melting - driven by the climate crisis - and groundwater pumping.

The authors of the new study said this water loss on land contributed to the shifts in the polar drift in the past two decades by changing the way mass is distributed around the world. In particular, they examined changes that occurred in the mid-1990s.

In 1995, the direction of polar drift shifted from southward to eastward. The average speed of drift from 1995 to 2020 also increased about 17 times from the average speed recorded from 1981 to 1995.

The research team said they have managed to wind modern pole tracking analysis backwards in time to learn why this drift occurred. The new research calculates the total land water loss in the 1990s before the Grace mission started.

Using data on glacier loss and estimations of groundwater pumping, the team calculated how the water stored on land changed. They found that the contributions of water loss from the polar regions is the main driver of polar drift, with contributions from water loss in nonpolar regions. Together, all this water loss explained the eastward change in polar drift.

“I think it brings an interesting piece of evidence to this question,” said Dr Humphrey. “It tells you how strong this mass change is - it’s so big that it can change the axis of the Earth.”

Dr Humphrey said the change to the Earth’s axis isn’t large enough that it would affect daily life. It could change the length of day we experience, but only by milliseconds.

But the faster ice melting couldn’t entirely explain the shift, Dr Deng said. While the team didn’t analyse this specifically, she speculated that the slight gap might be due to activities involving land water storage in non-polar regions, such as unsustainable groundwater pumping for agriculture.

Dr Humphrey said this evidence reveals how much direct human activity can have an impact on changes to the mass of water on land. Their analysis revealed large changes in water mass in areas like California, northern Texas, the region around Beijing and northern India, for example--all areas that have been pumping large amounts of groundwater for agricultural use.

“The groundwater contribution is also an important one,” Dr Humphrey said. “Here you have a local water management problem that is picked up by this type of analysis.”

The research team said the study has larger implications for our understanding of land water storage earlier in the 20th century. In total there are 176 years of data on polar drift. By using some of the methods used in the new research it could be possible to estimate how much land water was lost in past years.