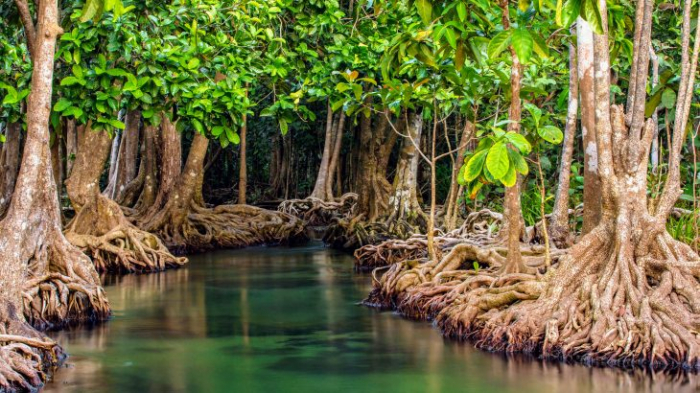 The majestic mangrove forests of Kenya's east coast have helped to bring levels of poaching and logging down, while taking large quantities of carbon out of the air.

To a visitor travelling south from Mombasa to savour the rich culture of the Swahili, the village of Gazi passes for a sleepy settlement in an almost forgotten stretch of the rapidly developing Kenyan coast. Inside the closely built mud-walled houses of the village, the day begins with a prayer call from the village mosque before dawn. Soon, early risers return from the shoreline with fish stocks that will supply Gazi's traders for the day. Later on in the day, women bake flatbreads on roadside hearths to sell to visiting fishermen from as far as Tanzania, while male elders play draft, a local social pastime, on shaded patios.

Life was not always so peaceful in Gazi – eight years or so ago, things looked very different. The harvesting of mangroves for firewood and construction poles had depleted the local forests. Fish stocks had declined, threatening the livelihoods of the 80% of the village who depend on the sea, says local fisherman Abdallah Mohamed. Without fish, locals turned to charcoal burning and harvesting the region's indigenous trees for firewood, which they would sell in nearby towns. In the wider region, illegal poaching of elephant, rhino and game was rife.

But today, the village has a new health centre, school and boreholes for fresh water. In the wider region illegal poaching of iconic wildlife like rhino and elephant has fallen by 90% in six years, according to the Kenya Wildlife Service.

Gazi is one of many villages along the Kenyan coast where poaching and illegal logging have fallen dramatically in recent years. In Gazi, central to the change are the village's mangrove forests, which have gone from being a declining source of firewood and construction poles to a significant player in the local economy.

Mangrove forests are some of the most efficient "sponges" for carbon on the planet. A hectare of mangrove forest can sink as much carbon as four hectares of rainforest, most of it sequestered in the depths of rich, frequently waterlogged soil below the mangrove roots. Cutting down mangrove forests prevents these areas from absorbing carbon, and it also releases stored carbon from the soils. By one estimate, mangrove deforestation generates as much as around 10% of emissions from deforestation globally, despite accounting for just 0.7% of tropical forest area.

Gazi's rich coastal forests are home to all nine varieties of mangrove that grow in Kenya, as well as diverse bird life and 180 species of fish. In 2013, the Mikoko Pamoja carbon project began to conserve and protect 117 hectares (289 acres) of mangrove forest around Gazi, in a partnership between coastal Kenyan communities, the Kenya Marine and Fisheries Institute, and the Plan Vivo Foundation, a Scottish charity. It was the first project of its kind to successfully turn blue carbon, like that stored in mangroves, into an economically viable initiative that could support a community.

The premise is simple: in exchange for ensuring the health of Kenya's coastal mangroves, the project sells carbon credits, which can be bought as a form of "offset". While offsetting is a far from perfect solution, it can be a useful measure for currently hard-to-decarbonise industries.

The first steps were to reduce forest loss and degradation. The project established woodlots of Casuarina trees as an alternative source of wood for construction poles and firewood for local people, who were also encouraged to use material falling from coconut trees for fuel too. Then the village participants received training on the economic benefits of conserving mangroves for carbon credits. Finally, the community led a mangrove-`planting initiative, preparing saplings for six to seven months in nurseries before planting the trees at appropriate sites.

It's a strategy that has paid off – each year the project trades the equivalent of 3,000 tonnes (3,300 tons) of carbon dioxide a year from its 117 hectares of mangrove, roughly the equivalent emissions of around 650 cars on the road each year.

It is a small start, but the success of Gazi's blue carbon scheme has inspired a similar 4,000-hectare (15 sq miles) blue carbon project in Vanga, a village located about 60km (37 miles) to the south of Gazi. Another project in Lamu to the north is also in its early stages, says Rahma Rashid, project coordinator of Mikoko Pamoja. Overall, about 660,000 hectares (2,548 sq miles) of land are under carbon trading schemes in Kenya, of which blue carbon is still a small, if powerful fraction.

"The success of these carbon projects is changing how people perceive climate change by assuring them there are growth opportunities," says Alfred Gichu, Kenya's national coordinator of REDD+, the UN-backed forest conservation scheme.

The knock-on effects of the projects have included a reduction in environmental crimes such as illegal logging and poaching. "Joblessness is the reason the youth usually engage in poaching and illegal logging in Kenya," says Samuel Mutisya, a reformed poacher from Kibwezi, a settlement just to the north of Tsavo National Park. "If carbon projects can create jobs for people in the villages, then society will start seeing forests and wildlife as their banks."

In the 1980s, there were only three rhinos in Tsavo National Park, which fans through south-eastern Kenya and connects the coast region to the country's hinterland. Now there are 120 rhinos.

"Kenya is one of the few countries in Africa that needs to be celebrated because its wildlife numbers are increasing and its conservation efforts are impressive," according to Kaddu Sebunya, chief executive of the Africa Wildlife Foundation, during the launch of the Benjamin Mkapa African Wildlife Photography Awards in Nairobi in early March.

At the same time, the Kenya Forestry Services says the country’s forest cover has grown from below 5% to 7%, progress that the service has attributed to conservation efforts such as those taking place in Gazi. Alongside carbon credit schemes, increased law enforcement and engaging with local communities has helped bring environmental crimes down.

George Wara, the service's ecosystem conservator responsible for managing 34,000 hectares (131 sq miles) of forest including 8,000 hectares (31 sq miles) of mangroves in Kwale county, agrees that carbon projects have helped reduce illegal logging and poaching in the coastal region. "If the community is benefitting from a forest, then they will have enthusiasm to protect it," says Wara.

Changare John, a local from Gazi village, knows the comforts of such successes. In a region that hardly receives enough rainfall for crops, John struggled to provide for her family by selling flatbreads and cooked beans at the roadside. During the low season, when there are few visitors in the village, she could hardly break even. Since she joined the Mikoko Pamoja project as a member, her fortunes have changed for the better.

"My three children are in school thanks to the bursary they get from the project," she says. "When they get sick, I do not have to worry about medical fees because our health centre is also supported by the project."

The local fisherman Abdallah Mohamed, who is not involved in the project, has also noticed benefits. "The fish returned after the community stopped taking firewood from the mangroves. Our indigenous trees are also thriving because there are fewer disturbances," he says. "This project is really a game changer."

With more blue carbon schemes set to roll out in Kenya, Gazi and other villages could soon see additional benefits from their conserved mangrove forests. As well as absorbing carbon, these forests are a natural buffer to some of the worst effects of climate change, including storm surges and, to an extent, rising sea levels.

As the world's mangroves are steadily being lost through urban development, and the expansion of agriculture and aquaculture, projects like Gazi's show that it is both possible and profitable to save the forests that can protect against climate change.

The emissions from travel it took to report this story were 30kg CO2, travelling by bus, ferry and train. The digital emissions from this story are an estimated 1.2g to 3.6g CO2 per page view. Find out more about how we calculated this figure here.