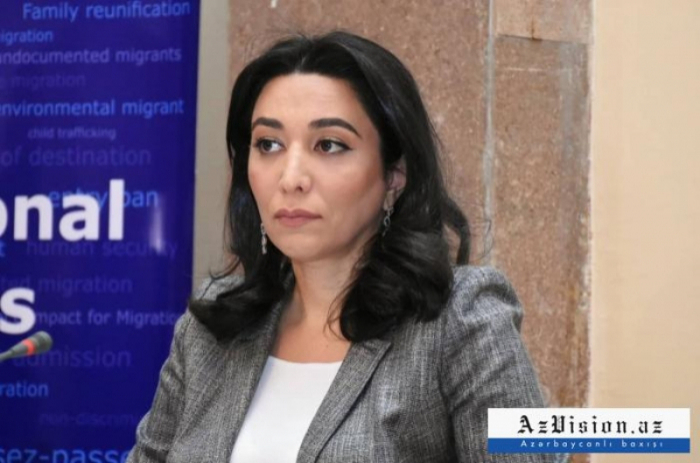 Commissioner for Human Rights (Ombudsman) of Azerbaijan Sabina Aliyeva has made a statement to support the implementation of the UN Resolution on “Combating glorification of Nazism, neo-Nazism and other practices that contribute to fuelling contemporary forms of racism, racial discrimination, xenophobia”.

The statement read: “The 9th of May, each year, is commemorated as a triumph over Nazi Germany in World War II. In fact, it is the victory for all who suffered from the WWII, Nazism, racism, racial discrimination, xenophobia and related intolerance.

But unfortunately, the world community observes the tendency of glorifying Nazism in Armenia. As such in the capital of Armenia, a monument was erected to fascist executioner and traitor Garegin Ter-Harutyunyan, who served German fascists under the nickname of Garegin Nzhdeh. The former ruling Republican Party of Armenia took steps to perpetuate the memory of such an ambiguous nationalist politician as Garegin Nzhdeh, who collaborated with the Third Reich.

The United Nations General Assembly passed a draft resolution on combating glorification of Nazism, neo-Nazism, and other practices that contribute to fuelling contemporary forms of racism, racial discrimination, xenophobia and related intolerance.

By its terms, the Assembly expressed deep concern about the glorification of the Nazi movement, neo-Nazism and former members of the Waffen SS organization - including by erecting monuments and memorials; holding public demonstrations glorifying the Nazi past, the Nazi movement and neo-Nazism; declaring or attempting to declare such members and those who fought against the anti-Hitler coalition, collaborated with the Nazi movement and committed war crimes and crimes against humanity participants in national liberation movements; and by the renaming of streets glorifying them.

Even the Ministry of Defense of Armenia established Nzhdeh medal to decorate military personnel and civilians.

From the above-mentioned resolution, it is seen that the UN is really concerned about the memorials that might have a negative impact on society by glorifying Nazism, fuelling contemporary forms of racism, racial discrimination, xenophobia and related intolerance as the world community witnessed in the case of memorializing Garegin Nzhdeh in Yerevan, Armenia.

We reiterate our concern about glorifying Nazism in the Armenian society by the political leadership of Armenia and call all relevant international human rights organizations to take necessary steps to stop such activities which are directed against humanity.”