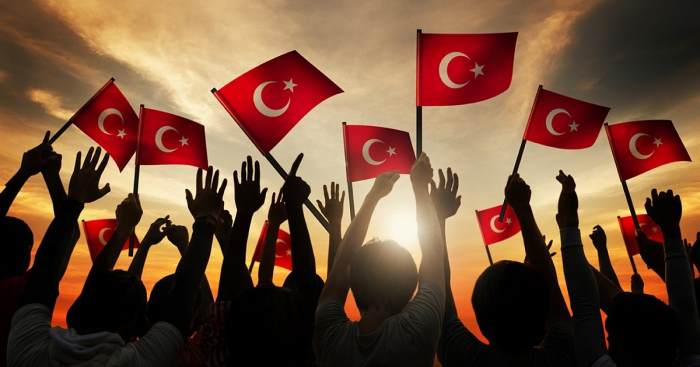 The Armenians would not be themselves if even on May 9, when all the nations of the former USSR solemnly celebrated their common victory over fascism, they would not have resorted to dirty provocations.

Having lost the opportunity to somehow play on the nerves of Azerbaijan through the long-exaggerated, but ultimately not justified information about the preparation of Russian peacekeepers for a parade in Khojaly [an Azerbaijani town], the remnants of the separatist regime destroyed during the 44-day Karabakh war demonstrated their true criminal and terrorist nature.

During the celebration of the 76th anniversary of the victory over fascism in Khankendi, a plate with a photograph of Monte Melkonyan "showcased" among the gallery of portraits of the Great Patriotic War participants. He is the same murderer – one of the leaders of the Armenian terrorist organization ASALA – whose “heroism” was clearly manifested during the military operations in Karabakh in 1991-1994 by massacres of Azerbaijanis and his direct involvement in the occupation of Azerbaijani territories. All these “deeds”, of course, have nothing to do with the victory over fascism.

Meanwhile, this fact, seemingly insignificant in the scale of much more egregious Armenian falsifications, betrays the main, as they say, the existential problem of the Armenians. It comes from the bloodthirsty hatred reigning in the Armenian consciousness towards the Turkic neighbors - the Turks and Azerbaijanis. The pantheon of Armenian "heroes" entirely consists of characters, whose trace in history was imprinted on the path of annihilation of the peaceful Turkic-Muslim population of Azerbaijan and Anatolia. Is it any wonder that the enmity with the Turkic neighbors has become the foundation of Armenian national thought, the quintessence of the ideology of the Armenian state? Moreover, it is so deeply rooted that even at times the awareness by some socio-political circles of the country that it contradicts the goals and objectives of the development of the Armenian state, does not contribute to the abandonment of this ideology.

“The enmity must be manageable, otherwise one may face a catastrophe not only for Armenia but also for the region,” Acting Prime Minister of Armenia Nikol Pashinyan said on May 9. This is a truly meaningful phrase! The Armenian leader is not in favor of abandoning "enmity with the Turks" as such, but in favor of only becoming "manageable". What Pashinyan means by this “manageability” is anyone's guess. Apparently, this pathological populist, always trying to combine the unconnected, wants to "refine" the enmity with those manifestations of it that can insure Armenia against new disasters.

That this is not just another Armenian myth, which has nothing to do with reality, from the "catastrophic" prospect of which, Armenia will not be insured by any half-measures. Especially when you consider that a country that has just suffered a heavy defeat in the war, does not even think to abandon the path that led to it. The forces preferring "enmity with the Turks" are again striving for power in Armenia, promising it another “bright future”.

Thus, May 9 was marked in Armenia with another "significant" event. Armenia’s ex-president Robert Kocharian and the leaders of the Dashnaktsutyun and Reviving Armenia parties signed a memorandum on the creation of an electoral bloc. This bloc is one of the forces that announced their participation in the upcoming early parliamentary elections in Armenia, openly trying to attract voters to their side by arguments of the “fruitfulness” of their previous bloody experience, on the altar of which hundreds of thousands of Muslim Turks were murdered in the 20th century.

Thus, "enmity with the Turks", which neither the Armenian authorities nor opposition forces want to give up, continues to remain its unchanged ideological and political trend. The well-known Hegelian phrase “History teaches us that man learns nothing from history” applied to the Armenians does not raise any doubts about its veracity.