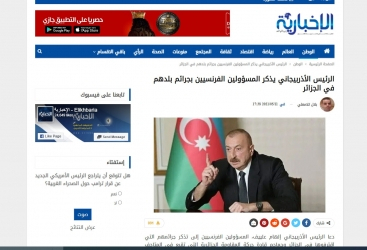 The Algerian newspaper ‘Al-Ekhbariya’ has published an article entitled "President Ilham Aliyev reminded France of the crimes that it committed in Algeria."

The article highlights the last interview of the President of Azerbaijan, where Ilham Aliyev spoke about the display of the skulls of slain leaders of the Algerian National Resistance Movement in the French Museum. The author noted that President Ilham Aliyev advised French officials to look in the mirror.

The article states that Azerbaijani President also called on the French Senate and MFA to stop its ugly campaign against Azerbaijan over the Military Trophy Park.

President Aliyev added that those journalists and foreign politicians should mind their own business because they are up to their neck in problems.

In the end, it was stated that the Military Trophy Park in Baku shows the bravery of the Azerbaijani Army, which liberated its lands from occupation.