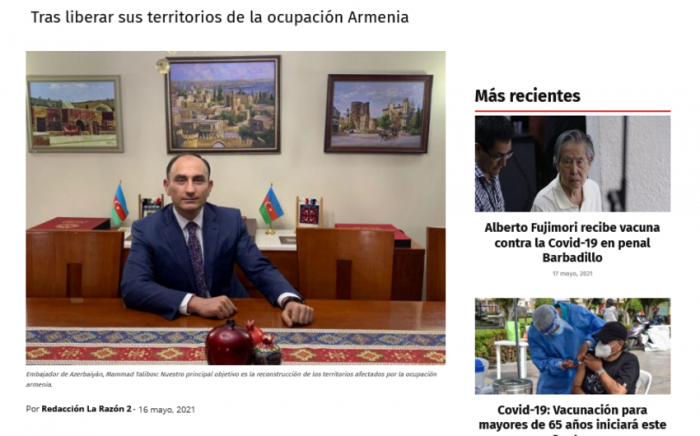 The interview highlights the liberation of Azerbaijani territories from the 30-year-long Armenian occupation, the signing of a trilateral statement on 20 November 2020, the establishment of a joint Russian-Turkish ceasefire monitoring center and the deployment of Russian peacekeepers in the region, the Azerbaijani Embassy in Mexico told AzVision.az.

The Peruvian newspaper also points out that Azerbaijan has already launched large-scale reconstruction work in its liberated territories in order to ensure the return of about a million IDPs to their homes.

“However, the destruction by Armenians of residential infrastructure in the liberated Azerbaijani cities and districts, as well as mine contamination of these territories by Armenia, is a major impediment to the reconstruction work,” the newspaper writes.

It also stresses that Armenia, in violation of international humanitarian law, still refuses to hand over minefield maps to Azerbaijan.