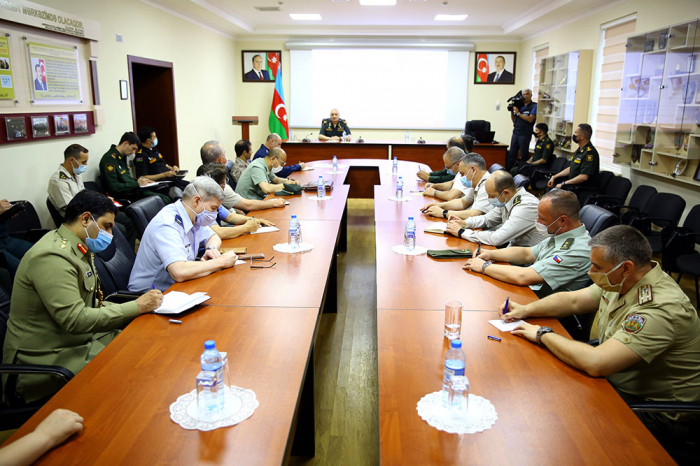 Today the International Military Cooperation Department of the Ministry of Defense organized a briefing for military attachés of foreign countries accredited to the Republic of Azerbaijan, AzVision.az reports citing the press service of Azerbaijan's Defense Ministry.

At the briefing, Chief of the International Military Cooperation Department of Ministry of Defense, Major General Huseyn Mahmudov informed the guests in detail about activities carried out by reconnaissance-sabotage groups of the Armenian armed forces in the Kalbajar region of the Armenian-Azerbaijani state border on May 27 at about 03:00, the crossing the state border by sabotage groups, as well as about their attempt to mine the territories of Azerbaijan and commit other provocations.

Major General H. Mahmudov noted that the Azerbaijani side immediately and objectively informed the public about the incident on the state border. Unlike Azerbaijan, Armenia was engaged in spreading contradictious misinformation to distract both the domestic audience and the international community from the true nature of the issue.

"I would like to emphasize especially that the provocation committed by Armenia was purposeful and took place within the sovereign borders of the Republic of Azerbaijan. The tension on the Armenian-Azerbaijani state border must be resolved only by means of negotiations, as well as delimitation and demarcation of the border," Major General H. Mahmudov stated.

At the end of the briefing, Major General H. Mahmudov answered questions from the guests.