Why 'quirky' people are attractive - iWONDER 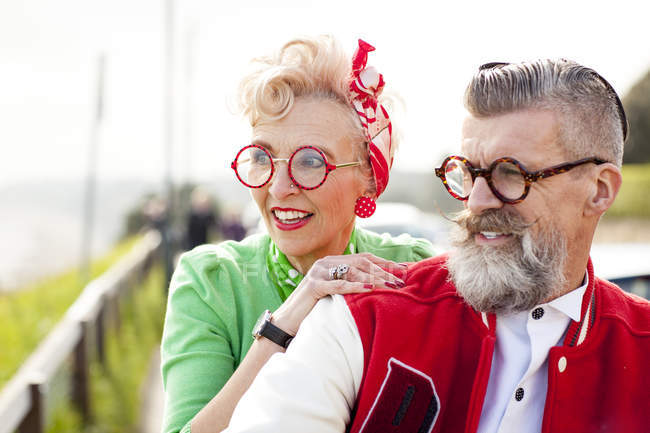 There are some universal standards of beauty, so why has evolution not made us all beautiful? When it comes to attraction, originality can pay off.

Recumbent on her chaise lounge, peacock-feather fan in hand, the model casts her gaze over her shoulder towards the artist. It's the early 19th Century, and Jean Auguste Dominique Ingres is painting La Grande Odalisque, a nude oil-on-canvas of a Turkish chambermaid. The painter has captured her allure, but something is not quite right. When it is shown to the public, the painting is heavily criticised – she has a weirdly long back and her body points in too many different directions.

A 2004 analysis by French doctors, including one who specialises in vertebral pain, suggests that not only would it be impossible for her to contort her body in this way, she would have needed five extra lumbar vertebrae for her back to look as long as it does.

The Romantic style of art from this period is filled with nude women, back to the observer, with tiny waists and wide hips. An "hourglass" figure was thought to be the height of beauty. Whether Ingres had intended to distort her proportions quite so much is debated – though no model could ever have posed like this. Maybe Ingres was exaggerating her slender back, narrow waist and wider hips to add a little more sexiness and slightly overdid it.

Subtle differences in our appearance can make a big difference. Slight changes in the dress make women seem more trustworthy, competent or attractive. As psychologist Miriam Liss of the University of Mary Washington in Fredericksburg, Virginia, and her co-authors found, to look honest and competent in a career setting, or even electable as a politician, a woman must dress conservatively and not sexily.

But why are some traits, like an hourglass figure, seemingly universally preferred? Do these traits convey something about our reproductive quality? If so, how come there is such diversity in human appearance?

The hourglass figure, some evolutionary biologists have reasoned, is attractive to men because it is linked to a woman's reproductive quality. They suggested that women with higher estrogen levels, and who were, therefore, more fertile, had wide hips and a narrow waist. If

"We thought at one point that several [of the attractive traits in women, like an hourglass figure, feminine face and good skin], are linked to sex hormones, but now we realise that we have less evidence that that is the case," says Jeanne Bovet, an evolutionary biologist at Northumbria University in the UK.

Bovet used artwork through history as a guide to study the idealised female body. She found that women's waist-to-hip ratios were largely fixed around 0.75 (meaning the waist is 75% as wide as the hips) from 500BCE to the 15th Century. From the 15th Century, women's portrayals in art changed with waists getting narrower until they were about two-thirds as wide as the hips by the time Ingres was painting. In the 20th Century, it seems that tastes may have reversed, though Bovet was using Playboy models and "Miss" beauty pageant winners to complete the dataset, which is not an exact comparison.

So, the hourglass figure is attractive to men, but it would appear it is not linked to anything genetically heritable that would be beneficial, such as demonstrating that women have evolutionarily useful levels of hormones. Bovet says that this preference arose simply because wider hips and a narrow waist communicate that a woman is of reproductive age, but not old, and that she has given birth a fewer number of times

"One thing that seems to really hold is that traits that are attractive in women are often cues of age and also parity [the number of times she has given birth]," says Bovet. "They are really closely related to attractiveness."

If these attractive qualities are not always linked to women's genes, then sexually selective pressures might not apply, meaning there wouldn't be a reason for an hourglass figure to become the most common body type. Is this why we don't all look the same?

Barnaby Dixson, a psychologist at the University of Queensland in Brisbane, Australia, and his colleagues asked heterosexual men and women to rate computer-generated body shapes of the opposite sex to see if an "ideal" body could be created through selection. Each body differed slightly in 24 areas, like thigh length, height, shoulder width, waist-to-hip ratio, breast size and so on.

The highest-rated body shapes were then paired into same-sex couples and crossed to create two offspring whom each contained a random mix of their mothers' or fathers' traits. This was continued generation after generation to see which traits were preferred or rejected.

For men choosing women, body mass was the first priority, with men choosing smaller women. It took a long time, though, for traits we might commonly think of as important, like breast size, to matter at all. Likewise waist-to-hip ratio was only really a later concern.

The female avatars in the final generation chosen by men were still quite diverse – each man in the study having shown a slightly different preference. For women choosing men, however, there seemed to be more consistency. They preferred a "swimmer's" body shape – tall with broad shoulders and an athletic build.

So, although there are general trends that are consistent for most people, how much each matters varies from person to person, says Dixson.

When it comes to attractive qualities that are under our control, like grooming choices and fashions, stable groups of anti-conformists can exist in populations of conformists. Imagine a family growing up in a city where two rival football teams play: Team A and Team B. On both sides of the family, there are supporters for each. A child in the family has a choice about which team to support (let's ignore for a second the option of supporting neither or hating football completely). One option they could go for is to support the most popular, therefore conforming and upsetting the fewest family members. Or, they could choose to be anti-conformist.

"Individuals sample a number of role models from the previous generation, count the number of As and Bs in their sample, and then adopt either A or B depending on these counts and their degree of conformity or anti-conformity," says Kaleda Krebs Denton, a PhD student in biology at Stanford University.

If the child has two A supporters and one B supporter in their family and is conformist, in all probability they will support A. If they are non-conformist, they might support B.

Now imagine that A and B represent something that might give a survival advantage – does the entire population conform? Not necessarily. Denton and her colleagues used computer models to see how complicating factors like migration and sexual selection affect the ratio of conformists to anti-conformists. They found that people might switch – conforming when something was reasonably popular but becoming an anti-conformist if it became too popular.

Are there any situations in which being anti-conformist has its advantages? "If we are talking about biological advantages, then anti-conformity is expected to be advantageous when the variant that produces the greatest fitness benefit is rare," says Denton. Perhaps in a new environment, or an environment that has dramatically changed, only a small number of individuals will have the best trait.

"Natural selection favours diversity," says Dixson. "At its core, it requires the ability to adjust and adapt to new environments as they're presented to you."

Take the colourful male guppy. Their long, bright fins appeal to female guppies, each of whom has her own particular colour and pattern preference. As such, there's no one "ideal" male guppy. It also means that averageness is not an advantage. It is better to be a unique guppy and hope you are just right for someone. In zoology, this is called polymorphism. Novelty has a reproductive advantage for these little fish.

In scenarios where novelty isn't sexually favoured, where instead one specific trait has deemed an ideal there are opportunities for organisms to exploit this bias by faking it.

If a male fiddler crab loses his claw in a fight, he is able to regrow an almost identical one. This new claw is the same length, but has less mass and is a less effective weapon than the original. Female fiddler crabs only choose their mate based on the length, and not the mass, of the male's claw, so they are unable to truly tell which are the best fighters. If the male crab lost his claw, there are probably better fighters around – but she wouldn't be able to tell.

Claw length is the key trait that matters to a female fiddler crab, so it's a bit like men only looking for a certain waist-to-hip ratio, or women focusing only on height.

Some sneaky fiddler crab males are then manipulating the focused attention of the females to disguise the fact that they are losers. Where there is such reliance on one cue to determine quality it becomes possible to act dishonestly. Where novelty is valued, it's much harder to be dishonest, says Dixson.

How is novelty valued in humans? For men, thick brows, facial hair and square jaws are an example of a phenotype that signals for high testosterone levels. In an evolutionary sense, it is an advantage for women, like with the fiddler crabs, to mate with the strongest, most capable men.

The recent popularity of beards among men has been used to coin the term "peak beard", which suggests facial hair might be on its way out. Is the same anti-conformist bias the driver behind peak beard?

One study from 2014 shows that after seeing lots of bearded faces, women will find clean-shaven men more attractive and vice versa.

"So you get these novelty effects – it's like: 'Something different is being shown to me and it's appealing," says Dixson.

"If we consider advantages as cultural, then anti-conformity might be advantageous in areas such as music, literature, fashion, or visual art," says Denton. "Here, it is not necessary that a rare variant is better in any way; rather, the uniqueness itself may be intrinsically valued."

This has been observed in the turnover of popular baby names. Where our ancestors might have chosen common names for their universality, modern popular baby names quickly go out of fashion – as if the fact that a name's popularity makes it unpopular again. When it comes to naming our children, we have an anti-conformist bias.

It might be too soon to say we have reached peak beard, or maybe, like with waist-to-hip ratios, there's just something attractive about beards that cannot be explained with genetics.