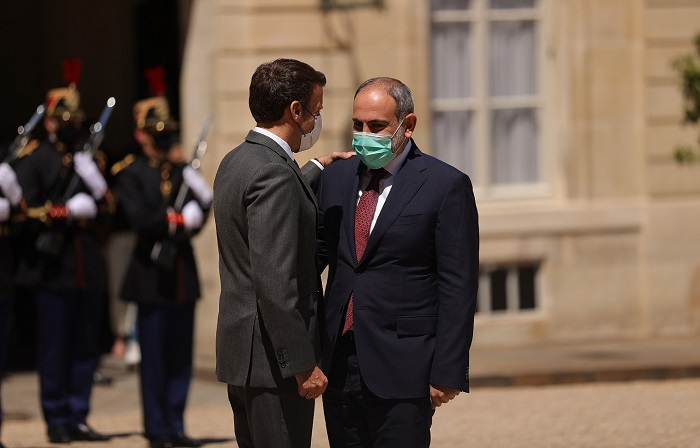 Acting Prime Minister of Armenia Nikol Pashinyan’s visit to France and Belgium did not bring any significant "success" for Yerevan. Not even French President Macron said anything in his speech that could be used for propaganda purposes during the Pashinyan’s election.

Although Macron made general statements such as solidarity with Armenians and France's support for Armenia in his latest speech, Russian Foreign Minister Sergei Lavrov's comments in Yerevan were approximately the same as the French president's comments on the current Karabakh issue and the Armenian-Azerbaijani relations. Like Lavrov, Macron also emphasised the significance of "clearing the mines from the area", as well as the "issue of detained Armenian servicemen."

The main conceptual difference between Macron and Lavrov's speech was that the French President supported the dialogue between Azerbaijan and Armenia through France while Russian FM supported the direct dialogue. In other words, the formula for the release of saboteurs in exchange for mine maps is quite possible, but instead of solving the problem, France aims to establish a direct dialogue between Azerbaijan and Armenia, to decrease Russia's role as a mediator and weaken its influence in the region. Macron's balanced position in the interests of both Russia and Azerbaijan proves that Paris wants to get a mandate for intervening in the processes in the South Caucasus as a co-chair of the OSCE Minsk Group.

As France traditionally acted as a mediator between Russia and the United States, it seeks to play the same role in the South Caucasus. France’s current position is also inconsistent with the interests of US President Joe Biden, who has recently recognized the so-called "Armenian genocide." There is no doubt that the United States will intervene in the processes happening in this region and there will be a kind of "bargain" with Russia. What is more important is to see who will mediate these processes. Currently, France is trying to take on the role of Turkey in the region.

In fact, France and Turkey are fighting for regional power. Similarly to the fight in Libya, the same thing is happening in Ukraine and the South Caucasus.

Considering all these realities, Pashinyan visited Paris aiming at gaining the political support of the West prior to the elections. Of course, in exchange for political support, Pashinyan must create conditions for Western intervention in the region.

Although the border provocations were organized with the hands of pro-Russian Kocharyan’s supporters to demonstrate the weakness of the current government in front of Azerbaijan, Pashinyan’s invitation of the United States and France to the region distorted plans of pro-Russians. Armenia's borders are under Russia’s control and Moscow wouldn’t like the intervention of NATO members in this area. This can be due to the fact that border provocations somehow slackened following Pashinyan’s statement.

One of the purposes of Pashinyan’s visit to Paris ahead of elections is his desire not only for support from the West, but also its military support. It is unknown whether Russia will be pleased with the election results. Pashinyan has concerns in this regard. Russia, which has a military base inside Armenia, could stage a military coup in the country at any time, or take an unpredictable step to change the government. To guarantee himself, Pashinyan met with Macron to receive some military support. Macron's statement that a UN resolution was required for military support was a diplomatic refusal by Paris. However, there is no doubt that Paris will discuss the issue with Washington. It is expected the US president can support Yerevan's position at the Biden-Putin summit on June 16.

Pashinyan’s visit to Paris is also of utmost significance in terms of pre- election propaganda. Armenia’s acting PM tries to create the impression that the world leaders already recognize and accept him as the leader of Armenia, which will affect people’s choice. Besides, with this visit Pashinyan promises integration into Europe to Armenians, which Pro-Russian Kocharyan doesn’t do.