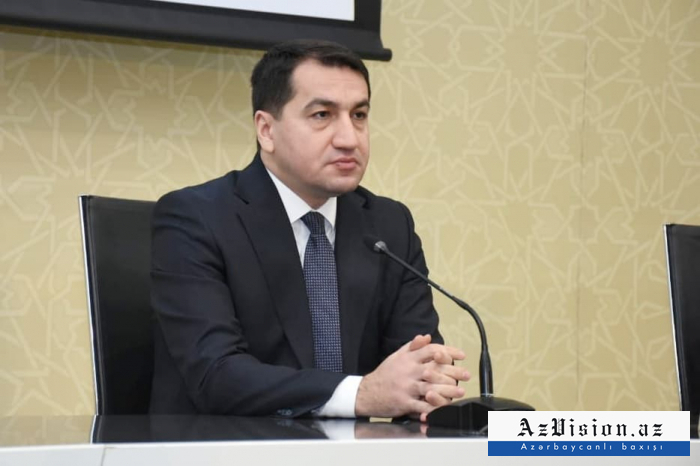 The Azerbaijani journalists who died from mine explosion in Kalbajar did a big and important job, Assistant to the President of Azerbaijan - Head of the Foreign Policy Department of the Presidential Administration Hikmat Hajiyev said.

Hajiyev made the remark at the funeral ceremony for AZERTAC employee Maharram Ibrahimov, one of the tragedy victims, AzVision.az reports.

According to him, the journalists documented crimes which were committed by Armenia in Azerbaijan’s former occupied territories before their liberation as a result of the Second Karabakh war from late Sept. to early Nov.2020.

“Their work will be highly appreciated even after 100 years. They didn’t return, even when AZERTAC and Azerbaijan TV offered them to adjust their working trip. Unfortunately, they became victims of a mine planted by hatred Armenians, their perfidious activities," the president’s assistant further said.

He noted that this loss is also a great loss for the Azerbaijani media.

“During the Second Karabakh war, we also witnessed the courage of Azerbaijani journalists who were next to Azerbaijani soldiers under the leadership of the supreme commander-in-chief,” Hajiyev added.

"An appeal was sent to international organizations to condemn this crime. Once again, I express my condolences on behalf of President Ilham Aliyev and First Lady Mehriban Aliyeva. May Allah rest the souls of the journalists!" concluded Hajiyev.

As earlier reported, a car with employees of Azerbaijani TV channels and news agencies sent to the Kalbajar district was blown up by an anti-tank mine in the direction of Susuzlug village at about 11:00 (GMT+4) on June 4.

As a result, the operator of the Azerbaijan Television and Radio Broadcasting CJSC (AzTV) Siraj Abishov, an employee of the Azerbaijan State News Agency (AZERTAC) Maharram Ibrahimov, the deputy representative of the Mayor’s Office of the Kalbajar district in the administrative-territorial district of Susuzlug village Arif Aliyev were killed. Also, four more people got injured and were hospitalized.