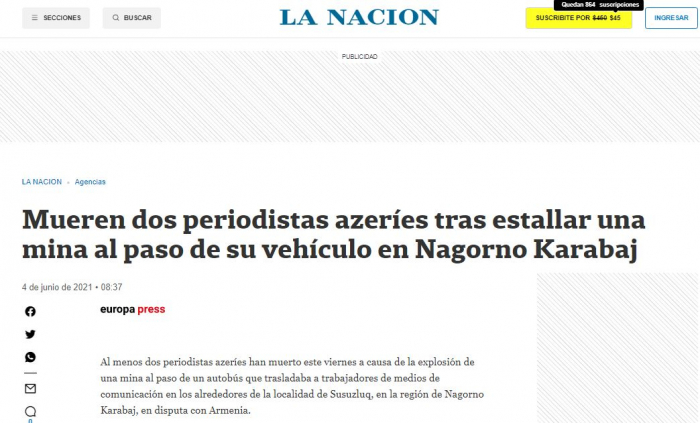 La Nación, an Argentine daily newspaper, has published an article on the death of Azerbaijani civilians in a landmine blast in the country’s liberated Kalbajar district on Friday.

The article says the mine explosion that claimed the lives of two journalists took place in Azerbaijan’s Nagorno-Karabakh region.

“A vehicle carrying media workers hit a landmine in Susuzlug village, Kalbajar on Friday, resulting in the death of three civilians, including two journalists. The cameraman of Azerbaijan’s state-run TV channel AzTV, Siraj Abishov, and the report of AZERTAC news agency, Maharram Ibrahimov, lost their lives,” reads the article.

The Argentine newspaper also points out the recent escalation of the situation on the Armenia-Azerbaijan state border following last year’s war between the two countries.