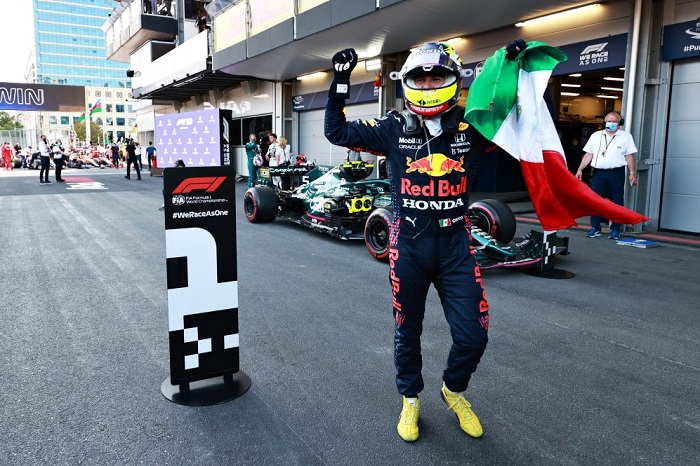 Sergio Pérez won the Azerbaijan Grand Prix at the Baku City circuit after late drama saw both title protagonists Lewis Hamilton and Max Verstappen fail to score a point. Verstappen suffered a tyre failure late in the race, costing him a likely win and Hamilton made a highly unusual error to drop from second to last on the final laps.

The Aston Martin of Sebastian Vettel was second, with AlphaTauri’s Pierre Gasly in third. Ferrari’s Charles Leclerc was in fourth with McLaren’s Lando Norris in fifth.

The victory was a superb result for Pérez, only his second in F1, who had driven solidly throughout. However what had been a largely uneventful race was dominated by serious concerns over the Pirelli tyres which appeared to suffer two major failures. There will be a serious investigation into the incidents after the race.

After qualifying was marked by a series of crashes against the looming walls of the street circuit, there were two far more worrying race accidents. The most important befalling Verstappen who went out with a tyre failure in a high-speed crash on the straight while comfortably leading. He had a major impact in the wall but was unharmed if furious at his bad luck.

Aston Martin’s Lance Stroll also suffered a left-rear failure at 180mph on the main straight and had an even bigger impact with the wall. The incidents have called into question the structural integrity of the Pirelli tyres as the drivers stopped early and looked to take the hard tyre to the finish, across around 39 laps. Pirelli had brought the three softest versions of its tyre compound to Baku.

Red Bull team principal Christian Horner believed it had been a tyre failure rather than a puncture. “I think it’s a tyre failure,” he said. “They were at the end of their life.” The Red Bull sporting director Jonathan Wheatley told the FIA the team had no warning in their data of any impending failure. The FIA red-flagged the race shortly afterwards, allowing all the teams to change their tyres.

With the pace of the leaders almost identical and the race a one-stopper, it had been something of a procession out front, with the lead decided through the pitstops until Verstappen’s failure after which Hamilton looked to have at least second place sealed. The British driver appeared to have a brake issue on a restart however and he went straight on in turn one, dropping to last.

It was enormously costly, Hamilton could have regained the championship but instead remains four points behind Verstappen.

Leclerc, who had started on pole, Hamilton and Verstappen all held their places on the short dash into turn one from the start. Leclerc staunchly held onto his lead until lap three when Hamilton made the most of the Mercedes power on the 1.37-mile straight, taking the slipstream and sweeping past before turn one.

On lap seven as Leclerc dropped back from Hamilton and lost his DRS, Verstappen made his pass to take second. Hamilton held his lead at one second, keeping Verstappen out of DRS range but with his tyres going off the world champion pitted for the hard tyres on lap 12. However Mercedes lost time in the stop at 4.6-seconds as they had to wait to release him as Gasly entered the pit lane.

With a rear gunner in place Verstappen made hay out front, opening a three-second gap, while Hamilton harried the Mexican. Yet he could not pass, with the pace over a lap almost identical across all three cars. A stable seven seconds separated them by the halfway point. Hamilton had pace on the straight but it was more than made up for by the Red Bulls in the twisty middle sector.

They had settled into a rhythm across the mid-race period when Stroll was the first to suffer a tyre failure on lap 31, bringing out the safety car. He lost his left-rear which hurled his car into the wall but he was fortunately unharmed.

With widespread debris the safety car remained out until lap 36. Verstappen nailed the restart and the train resumed with Verstappen again opening a three-second gap as his teammate stayed solidly in front of Hamilton.

Yet there was a bitter sting in the tail for Verstappen who crashed on lap 47, with the left-rear tyre failure. He was unhurt but furious, delivering an angry kick to the tyre in question as he left the track and the race was stopped to deal with the debris.

On the restart with two laps to go, Hamilton charged at Pérez looking to go up the inside. But having told his team just before the restart that “this is a marathon not a sprint” was too hot into turn one and went straight on. It was an extraordinary error from the world champion, perhaps mitigated by a brake-setting issue in his car. Pérez however held his nerve to go on and take the flag.