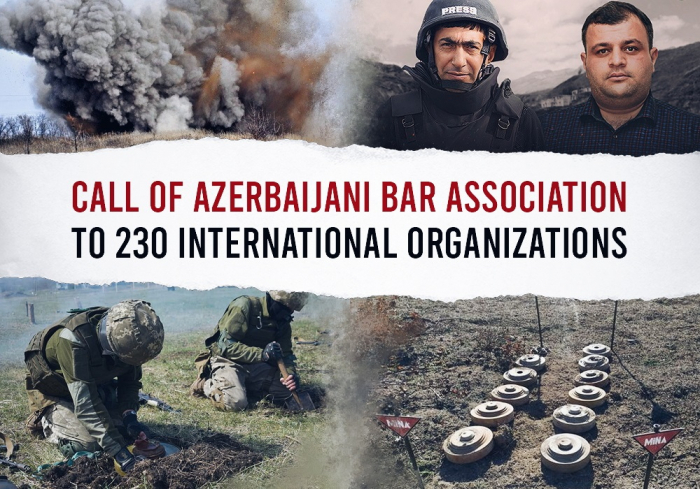 The Azerbaijani Bar Association has sent an appeal to 230 international organizations, including human rights institutions, foreign bar associations and civil societies, in three languages over the death of three Azerbaijani civilians, including two journalists, in a mine explosion in the country’s liberated Kalbajar district on June 4, AzVision.az reports.

“The second Nagorno-Karabakh War ended on 10th of November 2020 in a victory for the Azerbaijani Army when the Tripartite Declaration was signed between the Republic of Azerbaijan, the Republic of Armenia and the Russian Federation.

The Azerbaijani side has been demanding maps and schemes of mines, that have been planted in the territories of the Republic of Azerbaijan during the invasion period, from the Armenian side since the signing of the Tripartite Declaration. Despite this, the Republic of Armenia has not been providing the Azerbaijani side with the maps of minefields planted in territories of Azerbaijan subjected to its military occupation and armed forces of Armenia have been continuing criminal actions against Azerbaijani citizens by grossly violating the basic norms and principles of international humanitarian law, including the requirements of the Geneva Conventions of 1949.

In spite of Armenia’s refusal to release the maps of minefields, Azerbaijan National Agency for Mine Action (ANAMA) has been demining liberated territories. According to the official statement of Idris Ismayilov, the head of the operation carried out by ANAMA, only between 27th of September 2020 and 30th of November 2020 at least 4,500 anti-personnel mines and 2,000 anti-tank mines have been found and destroyed2

According to some estimations, the process of demining the entire liberated territories could take more than twenty years and is further complicated by the mountainous nature of the region.

As a result of the failure of the Armenian side to provide maps and schemes which is the continuation of the provocative acts committed by the Republic of Armenia against Azerbaijani people, on 4th of June, at 11 o'clock, 2 media workers and 1 employee of a state organization were killed when an anti-tank mine fell on the bus outside the Susuzluq district, where the employees of TV channels and news agencies sent to Kalbajar region which was newly released from Armenian invasion. Moreover, 4 people were hospitalized with high injuries as a result of this explosion.

Armenia’s refusal to provide these maps and other necessary information has several times ended up in injury and death of Azerbaijani citizens, violating their rights enshrined in the light of Articles 2 and 8 of the European Convention on Human Rights, Article 1 of Protocol No. 1, and Articles 2 and 3 of Protocol No. 4. More precisely, up to 20 civilians had been killed and over 70 had been injured since the signing of the Tripartite Declaration by March, 2021; however, this would not happen if Armenia compels with its obligations arising from the aforementioned provisions of international law.

Armenia’s refusal to abide by the international law and co-operate on this sensitive issue in spite of a mounting number of the victims outrages the Azerbaijani side, further strains the regional situation, continuing to impede realization of the vision of peace, security, and cooperation in the region, and averts the emergence of a co-operative environment between the two countries. With this in mind, we demand the Armenian side be forced to fulfill its obligations arising from the requirements of international law by providing maps and schemes of planted mines.

The Azerbaijani Bar Association appeals to foreign bar associations, legal societies, and international organizations not to ignore these human rights violations, and by approaching their mandate responsibly to make the political and military leadership of Armenia refrain from committing criminal acts and to make Armenia fulfill its obligations related to the provision of maps and schemes of minefields,” the appeal reads.