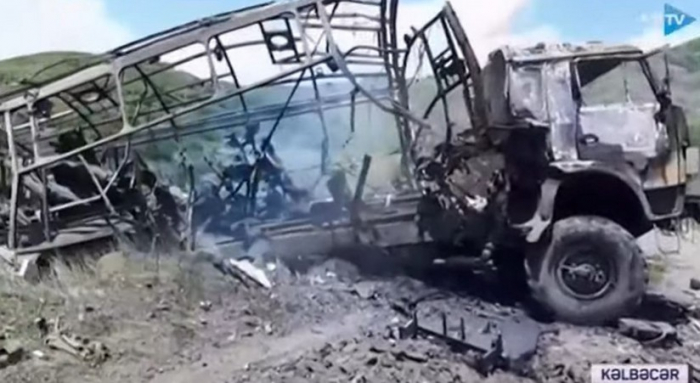 The Azerbaijan Culture Association “Karabakh” in Luxembourg has also appealed to international organizations regarding the Azerbaijani journalists who became victims of mine crime committed by Armenia.

The Association has sent an appeal to the Council of Europe, the Amnesty International, the UN High Commissioner for Human Rights, Human Rights Watch and other international organizations and media outlets in this regard.

The appeal reads: “Despite Azerbaijan’s demands for the provision of maps of landmines planted by Armenian armed forces in the liberated territories of Azerbaijan, Armenia keeps on ignoring the appeals. Armenian saboteurs infiltrating Azerbaijani territories are planting new mines in Azerbaijani settlements and roads. As a result of these insidious and inhuman actions, civilians are being killed and injured. Yet another tragedy happened on 4 June. This time, it was journalists who fell victim to Armenian provocation.

On June 4, 2021 at around 11 a.m. a bus carrying employees of TV channels and news agencies seconded to Kalbajar district liberated from occupation in connection with the performance of their service duties was struck by anti-tank mine while moving in the direction of Susuzlug village of the district. As a result, 2 media representatives and 1 public servant were killed, and 4 others were hospitalized with various injuries.

AZERTAC’s correspondent Maharram Ibrahimov and AZTV channel’s cameraman Siraj Abishov lost their lives as the crew vehicle exploded on an anti-tank mine explosion.

Arif Aliyev, a deputy representative of the Kalbajar executive authorities in the administrative-territorial district of Susuzlug village was also among the killed in the blast.

The ongoing refusal to hand over these maps, or any information that aids Azerbaijan’s efforts to save lives, has caused and continues to cause severe violations of Azerbaijani civilians’ European Convention rights under Articles 2 and 8 of the Convention, Article 1 of the Protocol No. I, and Articles 2(1) and 3(2) of Protocol No. IV.

Anti-personnel mines and other explosive devices planted by Armenia have killed or injured more than 120 people since the signing of the Joint Statement. These figures continue to increase despite efforts to clear over 35,000 mines from nearly 100 million square meters in the liberated territories in the 200 days since the Joint Statement was signed.

We call on the leaders of the world media, international and regional media organizations to vehemently condemn Armenia’s ongoing provocations and raise their voices in protest. This is not only an attack on the lives of civilians, but also an open act of terrorism against free speech and the activities of journalists. We hope that the world media and international media organizations will not remain indifferent to this.

We once again call on world community to condemn Armenia's actions, which run counter to the norms of international law, the fact that media workers and civilians are becoming victims of terrorism while performing their official duties, and to show journalistic solidarity.” 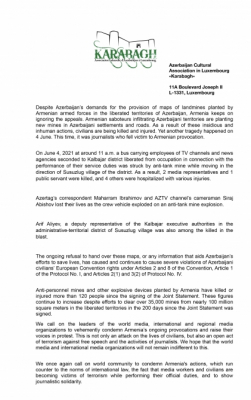