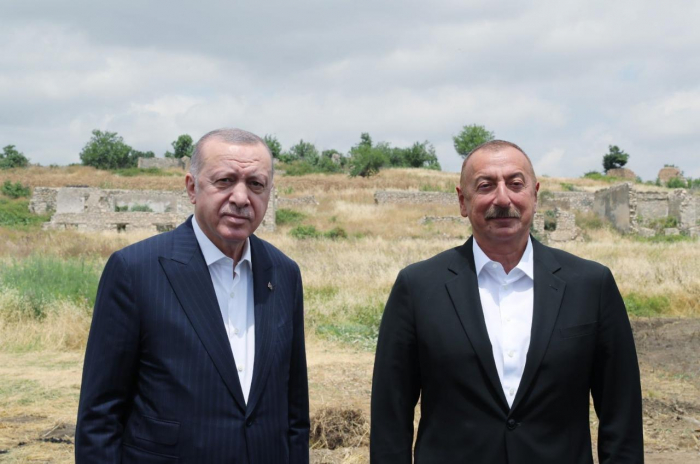 The head of state made the statement first.

It is a significant day in our lives today. It is a historic day. Today, we are welcoming the dear President of the brotherly country, Recep Tayyip Erdogan, to the Karabakh land, to the land of Shusha. I would like to take this opportunity to welcome my dear brother to Shusha and Karabakh on behalf of all the people of Azerbaijan.

I have repeatedly said in press conferences and in my speeches that Turkey and Azerbaijan today are the closest countries in the world. There are many factors that bind us together. First of all, history, culture, common ethnic roots, language, religion, national values, national interests, brotherhood of our peoples. Today, we are setting a unique example of cooperation and alliance on a global scale.

The Declaration signed today is based on history. The Declaration reflects the words of the great leaders of our peoples – Mustafa Kemal Ataturk and Heydar Aliyev. At the beginning of the 20th century, Mustafa Kemal Ataturk said, “Azerbaijan's joy is our joy and its sorrow is ours too.” At the end of the 20th century, Heydar Aliyev said, “Turkey and Azerbaijan are one nation in two states.” These historic words are the key factor for us, for our activities. We remain committed to this testament, demonstrate our commitment to our ancestors and guide future generations by signing the Declaration on allied relations in the city of Shusha, which was liberated in the 21st century.

The Declaration covers many important issues. At the international level, it dwells upon our cooperation, joint activities, political relations, economic and trade relations, culture, education, sports, youth policy and practically all other areas. It demonstrates the importance of energy security and the Southern Gas Corridor for Turkey, Azerbaijan and Europe. Every issue reflected in it is of great importance. I would like to highlight two issues among them. First, the issue of cooperation in the field of defense. The issues of defense industry and mutual military assistance are reflected in this Declaration. This is a historic achievement. We are showing again that we will always be together. We will continue to ensure each other's security, just as Turkey and Azerbaijan have been together on all issues so far. This will continue to be the case.

The second important issue is transport. The declaration contains very clear statements about the opening of the Zangazur corridor. This is the result of a new geopolitical situation that has emerged as a result of the second Karabakh war. Today, we are not only talking about the Zangazur corridor, which will connect Turkey and Azerbaijan by rail and road, we are creating this corridor through tangible work. It is important that this issue is reflected in the Joint Declaration on allied relations.

Today we are meeting in liberated Shusha. Today, the attention of the entire Azerbaijani people and indeed of the Turkish people too, I am sure, are here. The eyes of the world are here. Because this visit was eagerly anticipated in Azerbaijan. I know that it is of great interest. The statements made here in our ancient city of Shusha today will reverberate in the whole world. They will have great repercussions. The historic significance of this visit will be spoken about for many years to come.

The city of Shusha was liberated on 8 November last year. The liberation of Shusha required great heroism. Everyone who comes to Shusha and looks at these steep rocks can see that it takes great heroism, professionalism, courage and self-sacrifice to liberate this city, which is considered an impregnable fortress. Heroic Azerbaijani soldiers shed blood, became martyrs, climbed steep cliffs only with light weapons, liberated Shusha from the enemy and raised the Azerbaijani flag.

The Azerbaijani and Turkish flags waving in Shusha today show our unity. From the first days of the second Karabakh war, from the first hours, my dear brother, President Recep Tayyip Erdogan expressed unequivocal, clear and open support for Azerbaijan. From the first hours of the war, he said that Azerbaijan was not alone. This both inspired us and, at the same time, stopped all the forces and circles that were going to intervene. He said that Turkey was with Azerbaijan, and from the first hours to the last minutes of the war, the support of my dear brother and the Turkish Republic, the brotherly Turkish people gave us additional strength. This political and moral support inspired us. Messages of congratulation, expressions of support and solidarity from all over Turkey once again demonstrated our unity to the whole world.

Today, the Turkish media are here in Shusha, and I want to emphasize their activities. They risked their lives to show the real situation at the most dangerous moments of the war and to convey it to the audience and the world. I personally often watched the reports on Turkish TV channels during the war and saw again that it was not only about professionalism, but also about solidarity and love. The true voice of Azerbaijan, Azerbaijan’s just cause was conveyed to the world from the most dangerous places, from places where bombs were falling. The Turkish media immediately went there and prepared reports. They were well aware that since Armenia could not resist us on the battlefield, it fired on our civilians with long-range missiles, Tochka-U and Iskander M missiles, killing more than 100 civilians, including children and women. We saw the love, affection and solidarity of the entire Turkish people during the war again. We already knew that we are one nation in two states, as my late father said, but the war showed this to the whole world again, and we will never forget this support.

The second Karabakh war is now in the past. As a result of the 44-day war, the Armenian army was completely destroyed. Armenia was brought to its knees, waved the white flag, surrendered and was forced to sign an act of capitulation after the liberation of Shusha, after which our other districts were returned to us without a single shot being fired. The occupation, which lasted nearly 30 years, came to an end. Azerbaijan put an end to this with the support of brotherly Turkey. Thirty years of negotiations had yielded no results. This shows again that where there is a will, resolve, strength and justice, everything is possible. Of course, inspired by this support from an ally like Turkey in the second Karabakh war, Azerbaijan fulfilled its historic mission, restored justice and restored its territorial integrity.

A new era begins now. I met my dear brother in Fuzuli city today, met him there and showed him the ruined landscape of Fuzuli. There is no Fuzuli city. You have also been there and seen that there is not a single safe building. The hated enemy has destroyed all our buildings. Aghdam is in a similar situation. Our historical monuments have been destroyed, demolished and looted.

Notice what state the city of Shusha is in. Shusha is a historic city and not a single building has been built here in the 28 years of occupation. I showed this building to my dear brother. The building of Shusha governor's office was built during the time of my late father. The buildings in Shusha were built both during his time and during the reign of Panahali Khan and Ibrahimkhalil Khan. The loathsome enemy did not leave a single stone unturned. You can see the ruined places of Shusha. In fact, we have slightly refurbished some places here. When I first came here earlier this year, the city was completely devastated.

Shusha is a historical city of Azerbaijan because Panahali Khan laid the foundation of this city in 1752 and after that 98 percent of the population of Shusha were Azerbaijanis. Despite the 30 years of occupation, Shusha did not bend, was able to preserve its national spirit, dignity, and was waiting for us. And we came and liberated Shusha.

Today, the President of the brotherly country is our guest in the historic city, and it is impossible to express the feelings we have. I am sure that everyone who comes here feels the same, and we are grateful to the Almighty God for giving us the opportunity to experience these very emotional days.

My dear brother, we were looking forward to seeing you in Shusha. I invited you. In December last year, we, the Presidents of the two countries, agreed to hold our next military meeting here, and this is what happened. Welcome again, welcome to your homeland, welcome to Shusha!

Turkish-Azerbaijani unity and brotherhood are eternal!

Then the President of Turkey made a statement.

President of Azerbaijan Ilham Aliyev and President of the Republic of Turkey Recep Tayyip Erdogan signed a historic agreement on cooperation between Azerbaijan and Turkey, AzVision.az reports.