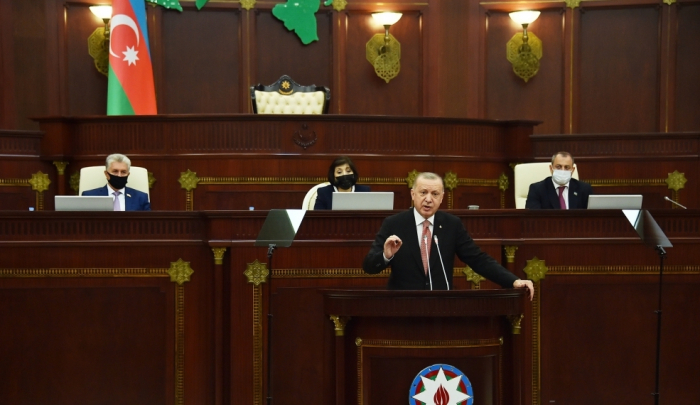 Turkish President Recep Tayyip Erdogan said in his speech that he is glad to be in the parliament of Azerbaijan, which liberated the Nagorno-Karabakh region, AzVision.az reports.

Victory in the Nagorno-Karabakh should not bother anyone, because this is a triumph of creation, not destruction, justice, and not atrocities and peace reigned in all corners of Karabakh.

Our Azerbaijani brothers will return to their homes. During our next visit, we would be glad to see the Azerbaijani brothers already in their lands. At present, roads are being built at a rapid pace, and infrastructure is being restored. We will build schools, hospitals and other facilities in the region.

We will be pleased to see that Shusha will become the cultural capital of the Turkic world in the future.

Great composer Uzeyir Hajibeyli, Bulbul, Natavan and other poets lived in this city. Today Shusha is reviving. The announcement of Shusha city as the cultural capital of Azerbaijan in this context is a clear message to the world.

Armenians will be able to travel to Moscow, to other parts of the world along the Zangezur corridor. Opportunities for cooperation in the new format of the Six have emerged in the region.

These are Turkey, Russia, Azerbaijan, Georgia, Armenia and Iran. Georgia had some questions, but during the last visit of the Georgian Prime Minister, I explained to him the benefits of this format. As relations between Armenia and Azerbaijan improve, Turkey will also take the necessary steps. The benefits that Turkey can give Armenia cannot be measured".