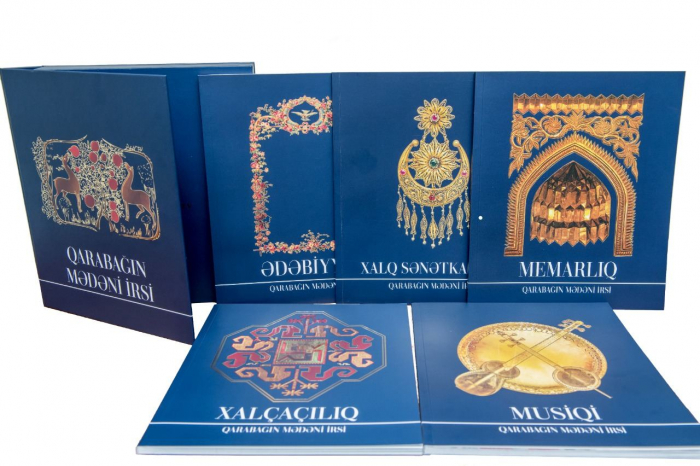 The collection consists of five editions dedicated to literature, music, the art of architecture, folk crafts, and carpet weaving.

The book entitled "Folk Crafts" tells about folk crafts, which have one of the important places in the rich creativity of the Azerbaijani people and are associated with their life and way of life.

This kind of art from the most ancient periods up till now covers a big sphere beginning from the clothing of the Azerbaijani people and ending with various household items and decorations.

The book describes that many types of art are widespread and developed, including woodcarving, stone carving, shoemaking, sericulture, artistic embroidery, dyeing, spinning of cotton fiber, leatherworking, pottery, carpentry, needlework, carpet weaving in the Nagorno-Karabakh region, which is an inseparable part of Azerbaijan.

Photos and information about the musical heritage of the Nagorno-Karabakh region, which has a centuries-old culture and has an important part of the cultural wealth of the Azerbaijani people, have been collected in the second part of the "Music" collection.

The Nagorno-Karabakh region, which stands out for its unique cultural and intangible cultural monuments, is considered the cradle of Azerbaijani music.

The Karabakh Khanate, created in the 18th century, gave a strong impetus to the development of Azerbaijani literature and art, in particular music.

The part of the collection related to the musical heritage of the Nagorno-Karabakh region includes the information that the musicians of the Nagorno-Karabakh region played an exceptional role in the complex cultural and historical processes in the 19th-20th centuries, the development of culture of the region and the formation of a dialogue between the music of the West and the East.

The book contains information and photographs about folk music (ashug), mugham, composer and vocal school of the Nagorno-Karabakh region.

The third part of the "Literature" collection provides readers with information about the creativity of the Azerbaijani people in the Nagorno-Karabakh region, cultural values that are part of the ancient and rich culture, examples of verbal creativity.

The fourth part of the collection contains information on the form of architectural monuments existing in Azerbaijan, their wealth from a typological and constructive point of view.

In this part of the "Cultural Heritage of Karabakh" collection, readers are provided with information, photographs and graphic images of architecture samples.

Since ancient periods of time, the favorable climatic conditions of Azerbaijan have created an opportunity to engage in carpet weaving on its territory. Karabakh carpets have a special place among Azerbaijani carpets.

The "Carpet weaving" part tells about the history of the emergence of carpet weaving, its technique, the characteristic features of the carpets of the Karabakh group, as well as the fact that the carpets created in this region are famous all over the world. 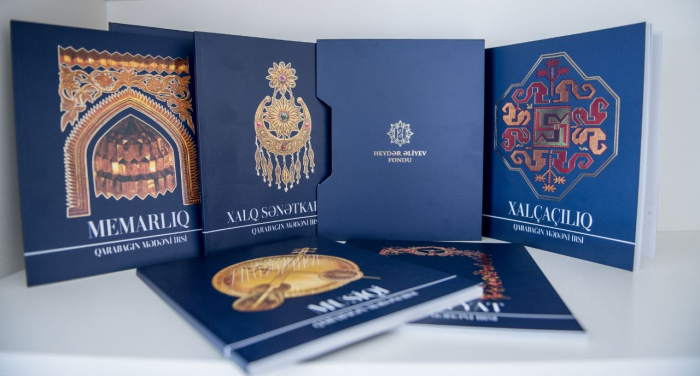