How the forgotten tricks of 'letterlocking' shaped history -  iWONDER 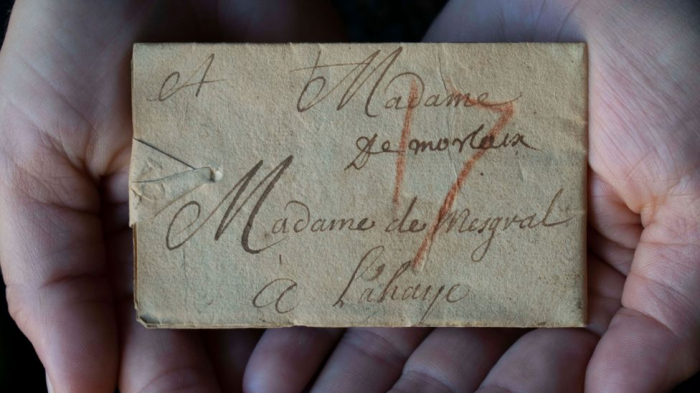 Hundreds of years ago, people developed ingenious tricks to secure their letters from prying eyes – and they did it with only paper, adhesive and folds.

Late at night on 8 February 1587, an imprisoned Mary Queen of Scots composed her last ever letter to her brother-in-law. "Tonight, after dinner, I have been advised of my sentence: I am to be executed like a criminal at eight in the morning," she wrote. "The Catholic faith and the assertion of my God-given right to the English crown are the two issues on which I am condemned." With a sad acceptance of her fate, she asked him to take care of her affairs and pay her servants, wishing him "good health and a long and happy life".

After Mary had finished writing, she then began to fold up the letter to secure it from prying eyes. She didn't want her captors snooping – and particularly not her cousin Queen Elizabeth I. However, envelopes were not used in the 1500s – not least because the paper was expensive – and there was no trustworthy postal service at the time.

Instead, Mary cut a thin strip from the paper margin, before folding up her message into a small rectangle. After poking the knife through the rectangle to make a hole, she then fed the strip through, looping it and tightening it a few times, creating a "spiral lock". No wax or adhesive was required, but crucially, if someone tried to sneak a look, they would have to rip through the strip, so her brother-in-law would know the message had been intercepted.

Mary Queen of Scots was far from the only person who was skilled in the art of "letter locking" – the technique became common throughout Europe during the Late Middle Ages (1250-1500) and Early Modern periods (1500-1815). By folding and cutting letters in various clever patterns, people attempted to hide their correspondence from prying eyes, and the "locks" came in myriad types.

But in the present day, we're only beginning to understand the technique's importance in history. In recent years, a whole taxonomy of apparently forgotten letter locking tricks have been uncovered.

So how does letter locking work, and is it possible to try it yourself?

The modern study of letter locking began when the conservator Jana Dambrogio was leafing through a cache of documents in the Vatican Secret Archives in Italy. In the early 2000s, she had been the first woman from outside the archive's conservation laboratory who was allowed to work there. On her first day, she was offered the chance to work on the Fondo Veneto Sezione II, a cache of maps, letters, legal and accounting documents from the late 1500s, many of which had not been repaired.

As she completed her conservation work, Dambrogio didn't always follow the writing, since it was often in old Italian dialects, but she did notice cuts, creases and folds in the paper. While it could be mistaken for damage to the untrained eye, she realised it was evidence of letter locking. So, she methodically described what she observed.

When Dambrogio returned to the US – she's now based at MIT in Massachusetts – those notes and models of the original documents would come in useful. "There are probably thousands of letters of the Vatican, but this handful that I modelled started to help us build the language of letter locking," she explains.

After connecting with Starza Smith, she and her colleagues began to seek out more examples of letter locking wherever they could find them, often hidden away in old archives and museum collections.

A few years ago, they came across one particularly rich bounty: a whole trunk full of 2,600 letters from 17th-Century Europe which had gone undelivered – 577 of which were unopened.

The collection had been kept by a married postmaster and postmistress called Simon Brienne and Marie Germain, who lived in the Netherlands. In the 1600s, the recipients of letters had to pay to receive them, so for various reasons – poverty, relocation or death – letters often failed to reach their destination. Many had the words "niet hebben" scribbled on them in Dutch, which means "refused". The couple and their employees kept them in the hope that recipients might eventually shell out, hence the trunk's nickname: “the piggy bank” (spaarpotje). Inadvertently, they had compiled one of the richest epistolary archives of the period.

Many of the letters were everyday correspondence, but collectively they paint a detailed picture of life in Europe during the 1600s. "The letters represent the thoughts, cares, and dreams of a cross-section of society: there are missives by ambassadors, dukes and duchesses, merchants, publishers, and spies, but also by actors and musicians, ordinary lovers, struggling refugees, and by women as well as men," write the researchers who have been studying the collection.

Along with various other sources they found, the Brienne Collection has allowed Dambrogio and Starza Smith to identify a range of letter locking techniques known to people during the Early Modern Age.

Over time, the pair have compiled what is essentially a "periodic table" of letter locking. This includes at least 18 different formats, ranging from the simplest of locks – a rolled scroll sealed with wax – to a packet that has 12 edges once sealed. They also describe attributes such as whether they feature slits or tucks, as well as rating the security of locks, according to how tamper-resistant they would have been. While it might have been possible for a determined snooper to reinstate some locks undetected, the difficulty of doing so varied – in some cases, they'd have no choice but to rip a strip of paper, or visibly break the adhesive.

I had a go at locking a letter myself recently in a workshop that the pair organised at MIT, making a "triangle lock". This particular one wasn't found in the Brienne Collection but was a technique used from the 1400s to the 1700s across Europe and England.

It was surprisingly complex, and I was struck by the ingenuity of the process. We started with an A4 sheet of paper and some tape, with Dambrogio leading us through the steps: "cut off a triangle from the bottom… fold short edge to short edge…don't make a sharp crease, just bend it …make a little slit and thread the little triangle through."

And what we ended up with looked a bit like this. The triangle shape, poked through the letter, is then folded over the edges and stuck down with glue or wax.
When sealed with wax, a triangular strip inserted through the letter reveals any tampering (Credit: Unlocking History Research Group)
You can try the triangle lock for yourself using this video demonstration, or the team's diagram below, along with two others that they have identified.

The second one in the diagram (middle) is modelled after a letter between two cousins from the Brienne Collection that the team recently "virtually unfolded" using X-ray microtomography. This meant that they could open up the folds without having to unseal any of the locks.

And if you fancy a true folding challenge, the third (bottom) is called the "dagger trap", based on a British intelligence letter, sent from Italy in 1601, which Dambrogio and Starza Smith found in the UK National Archives. It was "the most secure, complicated, and the time-consuming letter we’ve encountered". While it would have appeared to be a simple pleated letter from the outside, it was essentially booby-trapped, with a hidden strip of paper inside that "trips" when opened, revealing it had been unlocked. (This video walk-through may help.)

Today, when people think about keeping their messages secure from prying eyes, they tend to focus on digital communication, such as the "end-to-end encryption" of services such as WhatsApp or Signal. But letter locking demonstrates that the urge to communicate securely is much older than many might assume.

"As far back as humans have walked the Earth and wanted to document something, there's been a need to have discretion," says Dambrogio. The Ancient Greeks and Egyptians used seals for correspondence and notarisation. And the documentation of Mesopotamia, thousands of years ago, was often encased in clay envelopes called bullae.

These tricks for tamper-resistant communication have sometimes even played a role in pivotal historical events. When Mary Queen of Scots locked her last letter, she was acutely aware that the ruling powers might read her message, and wanted her brother-in-law to know if they did. After all, a previously intercepted letter was the reason that she faced her predicament: she had been caught authorising a plot to assassinate Elizabeth I.

In this light, then, letter locking becomes a new lens through which to view history and the ways we have sought to connect with one another over the centuries. As Starza Smith points out about the significance of Mary's final actions: "People often say the last thing she did before she was executed was to write a letter. Not true! The last thing she did was to lock a letter."