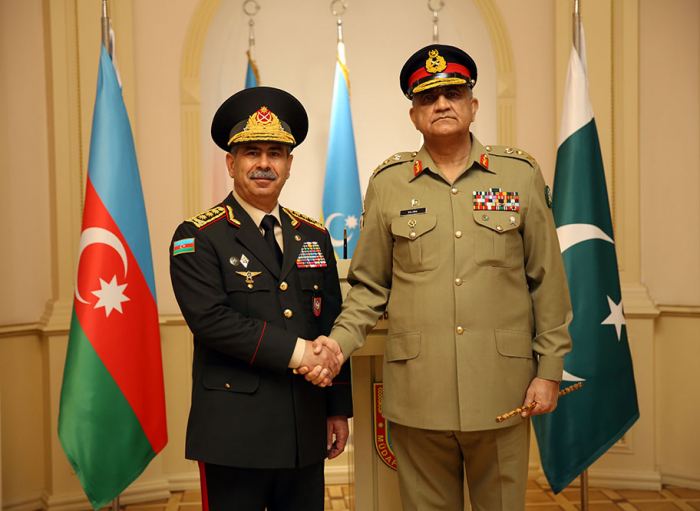 If we analyze the historic composition, nature and chemistry of bilateral relations between two brotherly countries, Pakistan and Azerbaijan we come to know that both sides being strategic allies share common historic, cultural and religious values. The relationship between the two countries has covered economic, defence, political and diplomatic cooperation since Azerbaijan’s independence.

Due to rapidly changing socio-economic, geopolitical and geostrategic conflicting realities in the region and beyond military and defence cooperation between Azerbaijan-Pakistan is get momentum and has been signified by continuous dialogue in the form of high-level meetings, workgroups and other similar interactions between the respective bodies and institutions of both states. It has reached to skies after the successful visit of COAS General Qamar Javed Bajwa visit to Baku.

Being a prominent regional expert of Azerbaijan & CIS, I must say that Pakistan, Azerbaijan and Turkey Trilateral Strategic Dialogue/Partnership have provided strong foundations of bilateral & trilateral cooperation among these countries.

On its part, Pakistan has been assisting Azerbaijan in terms of military, naval and air force training in Pakistan. Both the countries have been in serious negotiations for the sale of JF-17 Thunder with Azerbaijan which is now at advanced stage. Both countries have been extending their expertise in modern warfare which proved terminal in the 2nd War of Karbakah.

Now let us analyze the most recent visit of Chief of the Army Staff General Qamar Javed Bajwa to Azerbaijan during which he said both countries share common values based on rich cultural, religious and historical affinities and have tremendous geostrategic significance and potential for mutually beneficial and enhanced cooperation at all forums. Actually, this visit has vividly reflected the indispensable attributes of trustworthy relations between two countries based on mutual respect, pure brotherhood and the above and guarantor-ship of national sovereignty and territorial integrity.

His meetings with Azerbaijan’s President Ilham Aliyev and Minister for Defence Col Gen Hasanov Zakir Asgar Oglu in Baku have now further strengthened the scope, horizon and canvas of bilateral relations. During the meetings, matters of mutual interest, regional security situation, including recent developments in the Afghan peace process, and bilateral defence and security cooperation in various fields were thoroughly discussed which actually provided a future road map for further strengthening of bilateral relations between the two countries.

In this context, the meeting with Hasanov, Defense Minister Zakir Hasanov, facilitated an agreement on the joint use of mountain training centers, mountain training of military personnel. Moreover, Gen Bajwa desired to further enhance bilateral military cooperation and regional partnership between the two countries has now opened a new window of opportunity for future cooperation between the two sides.

In this regard, Azerbaijan’s President Ilham Aliyev highlighted the strategic importance of Pak-Azerbaijan military cooperation which has now been further strengthened with the visit of Gen Bajwa. The president desired to expand mutual military cooperation in the coming years and plan joint military exercises and other initiatives to strengthen our partnership even more.

Interestingly, Azerbaijan State Border Service Head Elchin Guliyev and Pakistan Army Chief of Staff Qamar Javed Bajwa discussed cooperation in the border protection sphere. Pakistan’s readiness to share its experience in establishing necessary infrastructures to guard the borders liberated from the occupation and clear territories of mines has now further cemented the utility and strategic orientation of bilateral relations between the two countries.

For the further strengthening of bilateral military cooperation, in the near past, there has been series of high official exchanges organized between two countries.

Pakistan Chiefs of Air Forces, Naval and General Nadeem Raz paid a personal visit to Baku and extended their experiences and expertise for the befitting propositions of resettlement, redevelopment, reinvestments, and reconstruction of all the newly liberated areas of the Karabakh region. Most recently Azerbaijan Naval Commander visited Pakistan and met with Naval and armed Forces chiefs and discussed matters of mutual interest pertaining to regional peace and stability which has now further strengthened scope, domain and prospects of air force and naval cooperation between two the two countries.

Even the Director General of FWO paid a visit to Baku and explored various avenues of mutual cooperation in infrastructural projects, cleaning of deadly landmines and prospective cooperation in gold mining. It hopes that after this visit numerous joint projects will be commenced between the two countries which would provide a win-win proposition.

In the past, Pakistan and Azerbaijan signed the “Bilateral Military Cooperation Agreement” which consequently geared up military cooperation between two countries.

If we look at the existing military relations we conclude that Azerbaijan and Pakistan hold relatively similar weaponry and military vehicle systems which would be a common benchmark to proceed further. It is suggested that proposed military cooperation may also include regular military exercises between the comparable services of both armed forces. Exchange of valuable strategic information, as well as common approaches towards the territorial armed conflict postures, can be a natural extension in improving bilateral relations in defence.

On its part, Azerbaijan has been expressing interest in importing the JF-17 multi-role fighters from Pakistan since 2007 which has not yet been metalized due to various complex and complicated reasons. Israel X-Factor and legal issues are one of the two main hurdles between the military cooperation between two countries. There is an immense potential for joint ventures in the production of war drones, unmanned fighter jets, submarines, missile technology and light arms which should be initiated as soon as possible.

It is, therefore, important for Pakistan to seriously move forward on imports of military equipment (fighter aircraft, tanks or rockets) to Azerbaijan. Azerbaijan’s Istiglal anti-material rifles and other small arms are also ideal for use in mountainous and tough terrains. Pakistan should consider including them in its basket given their competitive price, high quality and efficiency.

The two countries should also extend cooperation in the area of arms trade and develop a framework of sales of small arms and heavy military equipment according to the needs of each state in order to address the specific needs of the security sector. This framework can include bartering of arms based on a “preferred customer” program, thus, reducing budgetary expenditures.

Being a prominent regional expert on Azerbaijan & CIS, I foresee a befitting strategic partnership between Pakistan and Azerbaijan in the days to come which would further consolidate military cooperation, economic integration, FDIs, joint ventures, food & energy cooperation and above all cultural & education collaboration.

In this regard Pak-Azerbaijan Bilateral Political Consultation Forum in terms of reconstruction, energy cooperation, (oil & gas), education, tourism and culture has further strengthened the scope and diversity of Pak-Azerbaijan relations.

I suggest various meaningful plans for the further strengthening of bilateral trade volumes through close liaison between respective chambers of commerce, swapping of currencies, direct fights, banking & financial cooperation, commercial cargos, people-to-people contact, business-to-business contact, removal of certain customs duties and last but not least, sharing of information among the potential investors and businessmen of both the countries.

In this connection, serious efforts have already been started to build “Trade House” in both the countries which will be instrumental to showcase diverse furnished commodities, industrial items, contact desk and information centers of both the countries. Hopefully, it will further accelerate inflows of foreign direct investments (FDIs), brightening the scope of joint ventures (JVs), speed up the scale of innovations and exchange of expertise for the rapid development of business activities and pace of trade & commerce. It would be the start of a new era of commercial diplomacy between the two countries.

Dr. Mehmood Ul Hassan Khan, Member Board of Experts of the Center for Global and Strategic Studies (CGSS) of Pakistan and regional geopolitical analyst