Armenian terrorist: I know that Karabakh belongs to Azerbaijan – UPDATED 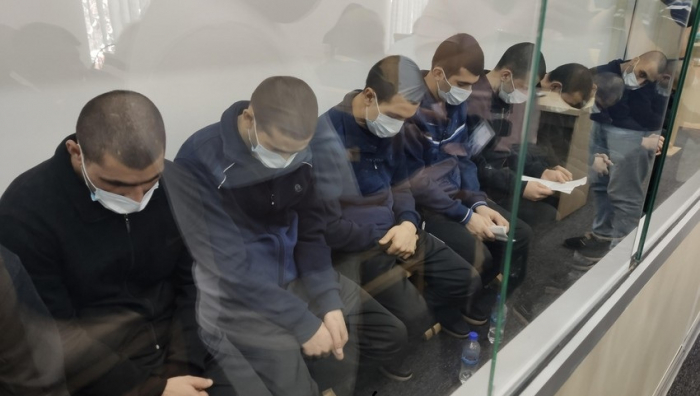 The Baku Court of Appeal on Tuesday continued the trial on the criminal case of another 13 members of the Armenian armed group that crossed into the territory of Azerbaijan to commit terrorist attacks.

The trial was chaired by Eldar Ismayilov, Judge of Baku Court on Grave Crimes.

The accused were asked to give free testimony.

In his testimony, accused Hovanesian said that on 25 November 2020, he was summoned to a military unit and supplied with weapons and sent to Lachin, and then to Hadrut.

“We were told that we would guard our border, and we were sent to an outpost. On December 13, Arsen Kazaryan phoned our group leader and told us to leave the outpost. While we were leaving, Azerbaijani servicemen detained us and confiscated our weapons. I knew that Armenia signed an act of capitulation, but I was unaware of the document’s content,” Hovanesian said.

Answering the prosecutor’s questions, the armed group member said that the day before their detention, the Azerbaijani military warned them to leave the area, but they did not obey.

“We were told that the war was over, but we were unaware of the fact that Azerbaijan had liberated Karabakh. They did not tell us what territory remained for us. I know that Karabakh belongs to Azerbaijan. I knew that I was serving on the territory of Azerbaijan, but I was forced because the commissariat sent me there,” Hovanesian added.

The trial is scheduled to resume on July 2.

The Baku Court of Appeal on Tuesday commenced the trial on the criminal case of another 13 members of the Armenian armed group that crossed into the territory of Azerbaijan to commit terrorist attacks.

The trial is chaired by Baku Court on Grave Crimes Judge Eldar Ismayilov.

The composition of the court and the public prosecutor was introduced to the accused during the trial.

The court explained to the accused their rights. The judge stressed that the accused can refuse to testify, express the protest to the composition of the court and the public prosecutor.

The defendants said during the trial that they were satisfied with the course of the preliminary investigation and the conditions of detention. They stressed that no pressure was exerted on them.

Then the prosecutor read out the indictment.

The members of these armed formations illegally crossed the state border of Azerbaijan on the night of November 26 through 27, 2020 as an organized group, took up the combat positions in the forest and other areas in the northwestern part of the Hadrut settlement of Khojavand district.

Those individuals attacked enterprises, institutions and organizations, as well as individuals, organized explosions, fires and carried out other terrorist actions that pose a threat to the life and health of people up until December 13, 2020, which may cause big damage to the property or lead to other socially dangerous consequences to violating public safety, sowing panic among the population or influencing the decision-making by the state authorities of Azerbaijan or international organizations.