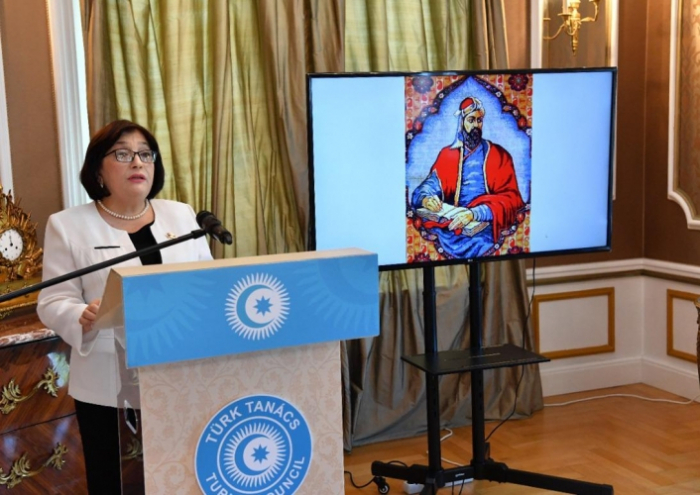 An Azerbaijani parliamentary delegation headed by Speaker Sahiba Gafarova attended the “The Year 2021 – the Nizami Ganjavi Year” hosted by the Budapest Representation Office of the Turkic Council on June 29, the parliament’s press service told AzVision.az.

The event was opened by Head of the Turkic Council’s Budapest Office János Hóvári who welcomed the parliamentary delegation of Azerbaijan led by Speaker Sahiba Gafarova. As he talked about the cooperation within the Turkic Council’s boundaries, Mr Hóvári shared his views upon the activities of Hungary as an observer in this institution.

Then, Deputy State Secretary of the Hungarian Ministry of Foreign Affairs András Baranyi, who referred himself to the current state and growth prospects of the relations between Azerbaijan and Hungary, made a speech. Azerbaijan is a fraternal state and strategic partner to Hungary, Mr Baranyi stressed before voicing satisfaction with the dynamic advancement of the mutual relations. He emphasized that the co-operation going on under the auspices of the Turkic Council was contributing to the progress of the bilateral relations between our countries.

Gafarova delivered a speech at the gathering, too.

She began by praising highly the Turkic Council’s Budapest Office as a symbol of the deep historical roots of the two nations and the connexion point of the Turkic World and the Hungarians. Speaker Gafarova underscored the importance of the Hungarian Parliament’s decision to continue the integration into the Turkic World, adding that both Hungary and the Turkic states were making efforts currently to make the co-operation amongst them more profound. As for the strengthening political connexions’ influence on other areas, too, Speaker Gafarova remarked that the purposeful joint efforts of Hungary and the Turkic states had borne positive results in the economic field already.

All the member states of the Council have delegated their representatives to Budapest. The representatives of the Turkic Council being present here now comes as another embodiment of the contacts amongst our peoples. The delegates of Azerbaijan, Turkey, Kyrgyzstan, Uzbekistan and Kazakhstan together with their colleagues from Hungary assign immense significance to intensifying the already-established bonds, according to Mrs Gafarova. Today, the Turkic Council is working on building a strategic vision. The ‘Turkic World Vision- 2040’ is a roadmap whereby we can advance to sounder foreign political coordination, more stringent security cooperation, signing free trade treaties amongst us, opening borders for transport operations and, of course, more in-depth co-operation in language and alphabet. These areas will bring us closer than ever and foster integration processes between our countries. We can shape a brighter future of the Turkic World by having common policies and better coordination in various fields.

Going further, Sahiba Gafarova said that combatting international terrorism, separatism, extremism and trans-border crime is another important task that the Turkic Council has set itself. She reminded the participants of the event that Azerbaijan had been suffering from the 30-years-long occupation of its territories by Armenia. Last year, however, Azerbaijan turned to its military-political devices and put an end to nearly 30 years of occupation by Armenia. Regrettably, the four resolutions of the UN Security Council demanding an immediate, full and unconditional withdrawal of Armenian troops from the occupied territories of Azerbaijan had remained on paper for three decades until, at last, Azerbaijan enforced them by itself and made its national territory whole again. Sahiba Gafarova emphasized that Azerbaijan had fully liberated the historically Azerbaijani lands of Кarabagh in the Patriotic War that had lasted for 44 days and had ended up binding Armenia to signing a capitulation act on 10 November 2020. Madame Speaker said her sincere thanks, on her own behalf and on that of the Milli Majlis of Azerbaijan, to the Turkic Council member states’ governments and peoples for their support to the fair and just stance of Azerbaijan in that war on aggression and occupation.

Then, the speaker stressed that it was gladdening that our countries had managed to establish the parliamentary dimension of the Turkic unity. The Parliamentary Assembly of the Turkic-speaking countries – the TURKPA – is of utmost importance for deepening the existing collaboration between our people. Since Hungary holds the observer’s status in the TURKPA, our nations will become yet closer as Hungary’s integration into that organization advances, Mrs Gafarova said with conviction.

It is well-pleasing that other countries, too, are sending in their membership applications to the Turkic Council. More than ten partners of ours have stated their intent to obtain observer status in this institution, according to Mrs. Gafarova.

Those who spoke after Mrs. Gafarova were Laura Pal, the translator of a book on the genius Azerbaijani poet Nizami Ganjavi published in Hungary, Péri Benedek and others. A program in memoriam Nizami Ganjavi was shown, too.

Later on, Speaker Gafarova signed the memory book of the office.