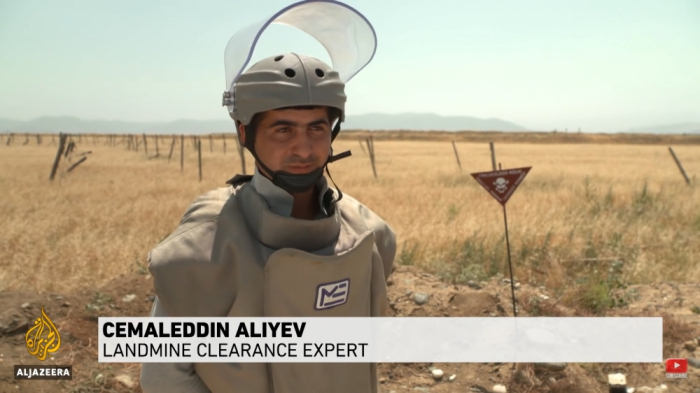 Al Jazeera TV channel prepared a report on the victims of explosions caused by landmines planted by Armenia during the 30-year-long occupation of Azerbaijani territories, AzVision.az reports.

The report stresses that since the end of the Second Karabakh War, over 100 civilians have been killed or injured as a result of landmine explosions in the liberated Azerbaijani lands.

Asli Mahmudova, a resident of the liberated Aghdam district, told Rasul Sardarov, an Al Jazeera correspondent, that her son, the father of two, lost his life as a result of a mine blast.

The report notes that since the announcement of the ceasefire in 1994, Armenia has buried more mines in the occupied territories of Azerbaijan than has been done in any other conflict zone worldwide.

Speaking to Al Jazeera, farmer Khalid Tahirov said he cannot graze livestock on these lands because of landmines.

The report says the Azerbaijani state always underlines Armenia’s unwillingness to provide all mine maps.

Jamaladdin Aliyev, a landmine clearance expert, spoke to Al Jazeera about the dangerousness of the demining process.

In conclusion, the report underscores the need for Armenia to hand over all mine maps to Azerbaijan.