Investigations continue at the plant that polluted Okhchuchay River 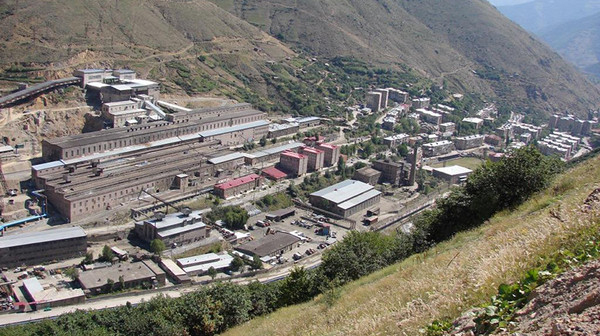 A few days ago, an investigation was launched at the Gajaran-Zangazur copper-molybdenum plant. Following the investigation, unnamed employee of the plant was detained. Armenian authorities did not provide detailed information on reason of the investigation and search at the plant, AzVision.az reports.

The leader of "Prosperous Armenia' Vage Akopyan told that during the pre-election campaign there was dispute between Nikol Pashinyan and the leadership of the plant. At that time, Pashinyan accussed the director of the plant of trying to change the employees' political views.

Note, the Zangezur Copper-Molybdenum Plant, the main shareholder of which is the German Kronimet Mining company involved in mining at the Gajaran mine, poses a serious threat to the environment and human health, polluting the Okhchuchay River on a catastrophic scale.

The river, most of which is located in the Syunik region of Armenia (the historical region of Azerbaijan called Zangezur), flows through the liberated Zangilan district and drains into the Araz River. The main streams of water are formed from snow (46 percent), rain (10 percent) and groundwater (44 percent). The average annual water flow is 10 cubic meters per second, the average annual volume is 315 million cubic meters, 40 percent of the annual flow is formed in spring, 43 percent - in summer, 10 percent - in autumn, and 7 percent - in winter.

Approximately 70 percent of Azerbaijan's surface water resources are formed in neighboring countries due to transboundary water flows. The transboundary river Okhchuchay is constantly polluted in Armenia by wastes from the Gafan and Gadjaran mining industries, playing the role of a collector of industrial waste. These industrial wastewaters are discharged into the river untreated, which increases the level of pollution many times over, therefore, these water resources are considered unsuitable for use in our country. In addition, Okhchuchay flows into the second largest river in the South Caucasus - Araz, and pollution directly affects the quality and its water reserves. The Araz, the largest tributary of the Kura, is also a transboundary river with Armenia and plays a decisive role in the irrigation of the cultivated areas of Azerbaijan. However, due to a serious change in the quality of water in the river, its use for domestic and agricultural needs can have an extremely negative impact.