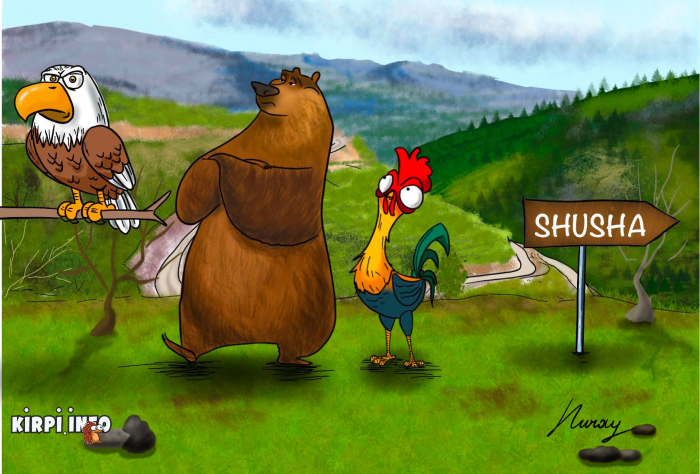 The refusal to visit Azerbaijan’s Shusha city by the ambassadors of the OSCE Minsk Group co-chairs – the United States, Russia and France – is another ‘nail in the coffin’ for the organization’s mediation format. Obviously, it is not a coincidence that the ambassadors of the three co-chairing countries behaved in the same way at the same time. Such attitude shows that this matter was discussed and agreed upon in advance.

What’s the most interesting is that neither the U.S. nor France can find a common ground with Russia. The world is currently experiencing a diplomatic “cold war” among these co-chairing countries. The refusal to visit Shusha is probably the only topic that they have found a common ground in recent months. But what is the purpose? The only option that comes to mind is “not to hurt Armenia”.

But then another question arises: Why should the ambassadors’ visit to Shusha “hurt” Armenia?! Is Shusha is a disputed territory?! Some Armenian media outlets stupidly present Shusha as a territory “occupied” by Armenia. If the ambassadors of the Minsk Group co-chairing countries refuse to go to Shusha, it turns out that they take seriously this ideological thesis fabricated by Armenian media?!

It is quite a controversial issue, and all three countries must clarify the refusal of their ambassadors in a way that will satisfy Baku. Otherwise, it will be impossible to avoid further misunderstandings and problems in cooperation with these countries in regional formats.

At present, Baku and Yerevan have differences of opinion in relation to the Minsk Group. Baku believes in a possible mediation of the Minsk Group in signing a peace treaty. Yerevan, on the contrary, seeks the continuation of discussions on the “status of Karabakh” under the auspices of the Minsk Group. Baku decisively rejects Yerevan’s such intention. Today the Minsk Group finds itself in an existential vacuum and is unable to decide what to do. Its indetermination is very reminiscent of its 25 years of inactivity.

The Minsk Group co-chairs, by not accepting the invitation to visit Shusha, made a serious mistake once again failed to demonstrate its impartiality. All this shows that the Minsk Group is somehow in favor of Armenia’s approach in the matter of defining its possible future mission. Such a stance by the Minsk Group is the continuation of the mistake it has been making for 25 years.

Such a step by the Minsk Group allows Baku to speak out its distrust of the co-chairs. Over the past years, the Minsk Group’s mission was to balance the regional interests of the three powers. The Armenia-Azerbaijan Nagorno-Karabakh conflict has already been resolved, and this mission has automatically come to an end. At present, it is necessary to help resolve “documentation issues” of the post-conflict period. Solving these issues requires a more technical and logistical approach the Minsk Group lacks for.

The visit of EU representatives (3+1) to the region in late May this year and the topics they discussed were quite interesting. It seemed that replacing the “Minsk Group Co-Chairs + Personal Representative of the OSCE Chairperson-in-Office” format with the “Foreign Ministers of 3 EU Member States + the mandate of the High Representative” one during this period is more appropriate for the work ahead.

The initiative of creating such a format emerged following the Romanian-initiated informal meeting of the EU foreign ministers in Lisbon in May. The “Lisbon Troika” – the foreign ministers of Romania, Austria and Lithuania – was put forward by Romania. The “Lisbon Troika” includes states with no geopolitical interests, representing only one power, the EU, in which all three countries seek strategic partnership. So, these countries are not burdened with the Minsk Group’s “balancing geopolitical interests” mission. Therefore, the “Lisbon Troika” has a greater chance of successful mediation in the discussion of serious, important issues.

This can be an updated format in line with new realities. The Minsk Group was an institution that was dealing with the conflict resolution. Against the backdrop of new realities, there is a great need for a new approach. Over the past period, the Minsk Group has demonstrated that it lacks enough flexibility to adapt to a new reality and a new specialization. Moreover, the mission is completely different.

The procedures of the post-conflict period should be implemented after the formation of a new government in Armenia. First of all, Armenia and Azerbaijan must complete border demarcation and sign a peace treaty. Solving these issues is beyond the capabilities of the Minsk Group. All this underscores the need to replace the “Minsk Troika” with the “Lisbon Troika” or some other similar format. Talking about meaningless and unrealistic issues such as the “status of Karabakh”, on the contrary, further complicates the process.

As President of Azerbaijan Ilham Aliyev stated, “if there is no peace treaty, it means that there is no peace”. The Minsk Group returns the region to the period of conflict by keeping the issue of the “status of Karabakh” relevant, while Azerbaijan is doing its best to bring the region to a post-conflict period. Therefore, it is high time to consider the issue of changing the “Minsk Troika”.