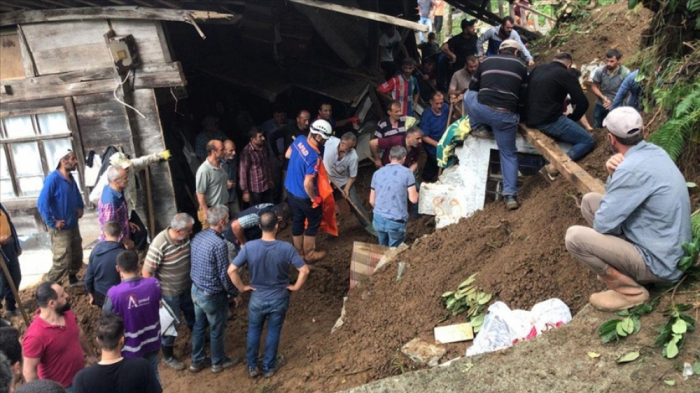 The death toll rose to six, with two people missing, in flooding and landslides triggered by heavy rain in Turkey’s Black Sea region, according to the Rize provincial governorate, AzVision.az reports citing the Turkish media.

The Disaster and Emergency Management Authority said downpours hit northeastern Rize on Wednesday after landslides caused heavy damage in some areas, with a building destroyed in the village of Muradiye.

Search and rescue teams recovered the bodies of four more people as efforts continue to find two who are missing in Muradiye and the district of Guneysu.

One body was recovered from the wreckage of a building and search and rescue operations are ongoing to find three others who are missing, Interior Minister Suleyman Soylu told the reporters.

Soylu arrived at the scene for inspection along with Transport and Infrastructure Minister Adil Karaismailoglu and Environment and Urbanization Minister Murat Kurum.

Meanwhile, another person was found dead in the Guneysu district during the search and rescue efforts.

Erdogan wished Allah's mercy to those who were killed.

Around 5 million Turkish liras ($582,000) will be sent to the region to help with recovery efforts.