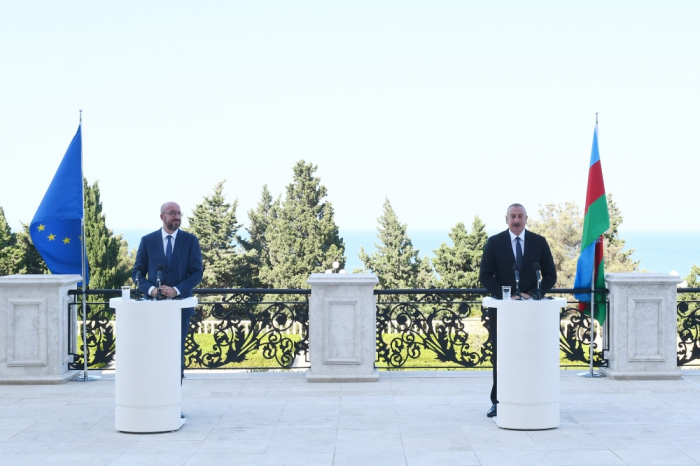 Dear guests, ladies and gentlemen!
I am very glad to host today President Charles Michel. We had very productive and long discussions about our cooperation, our plans and our achievements. I think the visit of President Michel to Azerbaijan is a good indication of our partnership.

For us, the European Union is a close partner. We have been working in different areas for many years. The agenda is very broad. A strong political context which we have, of course, creates a very good foundation for diversification of our cooperation.

The European Union is our main trading partner. Almost 40 percent of our trade is a trade with the European Union. Last year’s trade turnover was almost $9.5 billion. $6.8 billion dollars is Azerbaijani export to EU member states. More than 1,700 companies from member states work in Azerbaijan. This also demonstrates the scope of our economic activity.

We are very active in bilateral ties with the member states. With 9 member states of EU, Azerbaijan signed or adopted documents on strategic partnership. So one-third of EU member states consider Azerbaijan as a strategic partner. I think this is a very big achievement of our government. This also creates additional opportunities for cooperation. Important part on our agenda, of course, is related to energy security. Here, we can only report about great achievements, I would say historical achievements, especially the completion of the Southern Gas Corridor project. The last day of the last year is a really event of the historical importance. The Trans Adriatic Pipeline which was the last-fourth segment of the Southern Gas Corridor is already in operation. Since January 1 until today, already more than 3 billion cubic meters of natural gas was exported from Azerbaijan to EU member states, particularly to Italy, Greece and Bulgaria. Of course, the volume of natural gas to be exported to European Union market will grow. Also, I would like to add that the Southern Gas Corridor is a project of energy security and with EU we, for many years, are chairing the Southern Gas Corridor Advisory Council and under the leadership of EU and Azerbaijan Advisory Council became also important factor of successful implementation of this project. 3,500 km length integrated pipeline system and huge Shah Deniz 2 gas field’s development, really is a unique experience of cooperation between countries, companies and international financial institutions. The total investments in the South Gas Corridor project were more than $33 billion. At the same time, for many years already, for 15 years Azerbaijan is a reliable crude oil supplier to European consumers. And now, as a gas supplier our potential, of course, will grow and this will create more opportunities for us as an exporter, for transiters and for consumers, because gas from Azerbaijan is not only gas from the new route but is a gas from the new source. This makes this project really the project of energy security.

We discussed with Mr. President today the issues related to connectivity. In general this issue was always on the agenda between EU and Azerbaijan, especially after completion of the huge transportation infrastructure projects. After the second Karabakh war there are new opportunities for opening of all communications in the region as it was provided by the trilateral agreement of November 10, last year. So, this issue was broadly discussed today, as well as other issues of post-conflict development in the region, because this created a new situation, this created new realities. Azerbaijan put an end to a long-lasting Armenian occupation of our territories. Azerbaijan itself implemented resolutions of the UN Security Council, demanding unconditional and full withdrawal of Armenian troops from our territories, and Azerbaijan has put an end to war. Therefore, now it is time to think about peace and to turn the page. We are ready for that. Today, with Mr. President we broadly discussed our plans, our initiatives and our approaches to the newly emerged situation. I think that demonstrating good will and very pragmatic approach in a relatively short period of time, we can resolve most of the still remaining issues on the table and lay down the foundation for a broad regional cooperation in the region.

EU plays, and I am sure will play very important role from this point of view and the visit of Mr. President to the three countries of the South Caucasus demonstrates European involvement, European agenda. It is fully in line with our agenda. Our views coincide with this issue also. Of course, the post-conflict development with respect to connectivity issues, with respect to issues of reconstruction of the liberated territories will be always on our agenda. Mr. President, once again, I would like to express gratitude for your visit and express assurance that our strong partnership and cooperation will successfully continue. Thank you.

Statement by President of the European Council Charles Michel

- Thank you very much, Mr. President.
In turn, I would like to thank you for your hospitality and for the opportunity to meet with you. As you mentioned, an extensive and in-depth exchange of views on the nature of relations between the European Union and Azerbaijan is the first issue we discussed. Because we want to give another impetus to our relations. We actually want to give the partnership between the European Union and Azerbaijan a strategic nature. This morning, I got acquainted with future-oriented projects in Azerbaijan in the fields of innovation, satellites, as well as infrastructure. I was familiarized with the work on creating new opportunities in the port of Baku, as well as the regional scale. We understand that the partnership between the European Union and Azerbaijan is not based on financial support. On the contrary, it is a partnership based on the desire to work together, on innovation, technological exchanges and economic cooperation. It is in this spirit that the two priorities the European Union considers in terms of economic development – climate change and digital revolution – must be at the heart of the projects we are launching together.

The second topic is the preparation for the EU Eastern Partnership Summit in December. It is important for us to exchange views in order to set expectations. Both sides are preparing for the summit.

You rightly noted that my visit to many Eastern Partnership countries is a sign. It is a sign of the work the European Union is doing in the region. It is a message. This is due to our commitment to security, stability and prosperity in the region, to mobilizing the capabilities and resources of the European Union as a result of dialogue with partners and knowledge of different expectations of Eastern Partnership partners.

The third issue, as you mentioned, is the situation related to Azerbaijan and Armenia. In fact, I would like to thank you that even before this visit, a few weeks ago, we had several telephone conversations to exchange views on the analysis of the regional situation. I would like to thank you for your commitments. Those were the first steps taken. On the one hand, there is the issue of the availability of mine maps and, on the other hand, there is the issue of prisoners, which is considered an important one. At the first stage, this was resolved. We do hope that other stages related to this issue will take place in the near future. At the same time, we had the opportunity to discuss the outstanding issues in great detail in order to achieve certain solutions and these options should be sustainable. I told you that the European Union is ready to support efforts to make progress on various issues. For example, it is a question of delimitation of borders, and for this we are ready to provide European expert assistance and, if necessary and desired, European monitoring. As for the delimitation of borders, there is also the issue of the armed forces located close to the disputed areas. I think this topic should also be discussed.

The third topic – you mentioned it in particular and we are returning to that topic. This is the importance of regional cooperation in various fields. You mentioned the importance of the energy sector in the whole region and even beyond its borders. Infrastructure is important. This is especially true for transportation and various routes. We have also discussed this issue. The European Union also wants to participate in and encourage regional cooperation efforts. We want to convey this message to all parties and countries that are ready to mobilize resources on this issue. I will be in Georgia tonight and tomorrow. This topic will also be on the agenda of our work and plans in Georgia. We believe that peace, lasting peace is about good agreements and their implementation. There are other issues that will sooner or later be discussed in order to make lasting peace a reality for the sake of prosperity, stability and security.

Finally, we have examined a number of issues related to the broader geopolitical situation. We noted some of Azerbaijan's efforts in a number of areas, especially in the field of secularism.

There are many debates on this issue in the world.

Mr. President, thank you again for this exchange of views. EU values are a political project that supports democracy, human rights and freedoms. However, the project also seeks to develop strong partnerships with a number of partners to achieve implement of mutual interest.

Thank you for the opportunity to deepen the relations between your country and the European Union.

Then the presidents answered questions from the media. 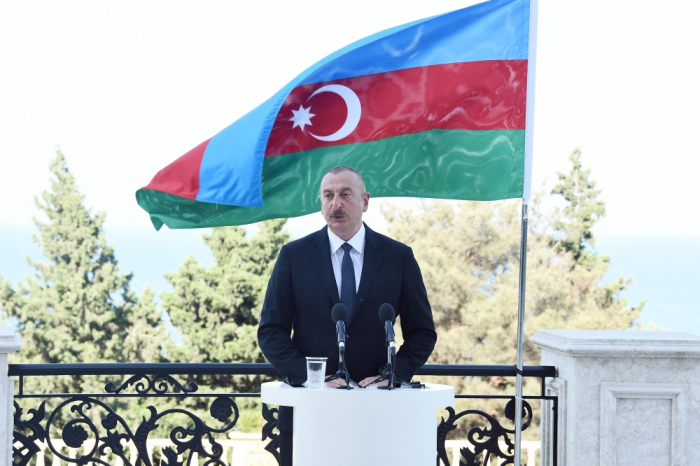 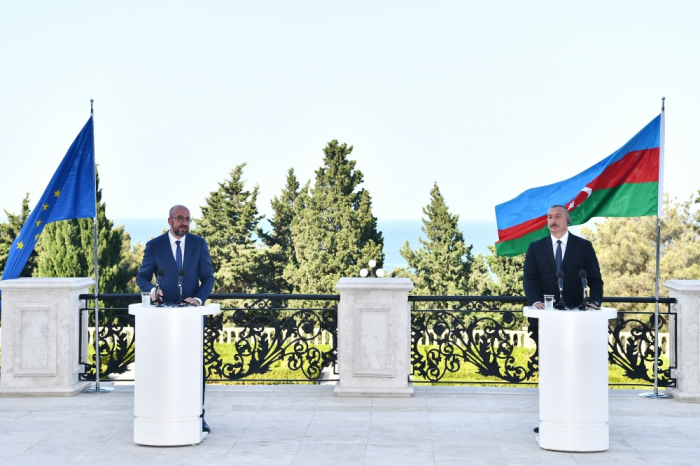