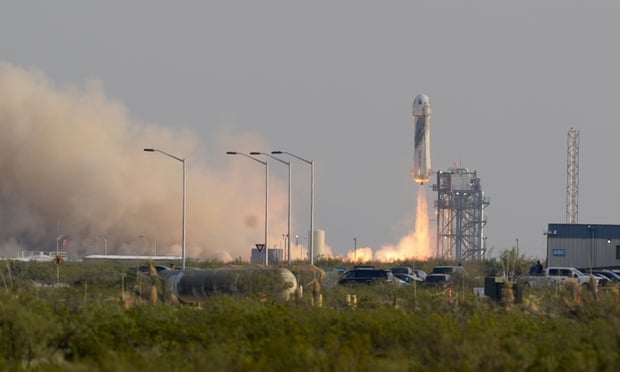 Jeff Bezos has completed his pioneering foray into space, the Amazon founder and three crewmates, including his brother Mark, touching down in the Texas desert early on Tuesday after a sub-orbital flight lasting a mere 11 minutes, AzVision.az reports citing the Guardian.

The first crewed mission of the New Shepard rocket ship, developed by the billionaire’s Blue Origin space company, set several records, including the oldest and youngest humans to fly into space.

Wally Funk, an 82-year-old female aviation pioneer who trained as an astronaut in the 1960s, flew as Bezos’s guest, while Oliver Daemen, 18, a student from the Netherlands and son of a private enquiry firm’s chief executive, was Blue Origin’s first paying customer.

Bezos, 57, one of the world’s richest people with an estimated net worth of $206bn, has attracted criticism for investing his fortune into space tourism amid concerns over working conditions at Amazon, and “aggressive” tax avoidance.

New Shepard, named as a tribute to Alan Shepard, the first American in Space in 1961, blasted off into a clear blue sky from the launchpad in Van Horn, Texas, at 8.12am local time, the first of three scheduled flights this year, on the 52nd anniversary of the Apollo 11 moon landing.

The crew capsule successfully separated from its rocket booster shortly before reaching the 62-mile altitude Karman Line, the internationally accepted boundary of space, after about three minutes of flight.

The crew experienced about three to four minutes of weightlessness during which the spacecraft reached the top of its flight path at 66.5 miles, more than 10 miles higher than the British billionaire Sir Richard Branson’s flight to the edge of space aboard Virgin Galactic’s VSS Unity nine days earlier.

Audio from the capsule on Blue Origin’s live webcast of the flight captured the crew members shouting in excitement as they floated around the spacecraft.

After re-entering Earth’s atmosphere, the capsule glided to a gentle landing on parachutes, minutes after the reusable booster returned to a powered landing on a nearby pad.

Bezos assumed the moniker “Astronaut Demo” for the flight to distinguish him from his 53-year-old brother.

Their sister Christina, director of the Bezos family foundation, sent her siblings a message before the flight, reminding them how they would pretend to be Star Trek characters as children.

“As you buckle in, I’m reminded of when Jeff was Captain Kirk, Mark, you were Sulu, and I took the role of Uhura, we would battle Klingons while firing torpedoes, all the while dodging in and out of traffic, and praying that we make it to our destination safely,” she said.

“Mark, be prepared to fire those torpedoes in order to do so. Now, get your asses back down here so I can give you a big hug. We love you, and Godspeed New Shepard.”

“I’m excited, I’m not really nervous,” Bezos told CBS’s This Morning on Monday. “This vehicle is ready, this crew is ready, we are feeling really good about it.”

Blue Origin has opened sales for future space tourism flights, but has not set a price, or revealed how much Daemen paid. The winning bid in a June auction for the first seat was $28m (£20m), the winner pulling out of today’s flight because of a “scheduling conflict”.