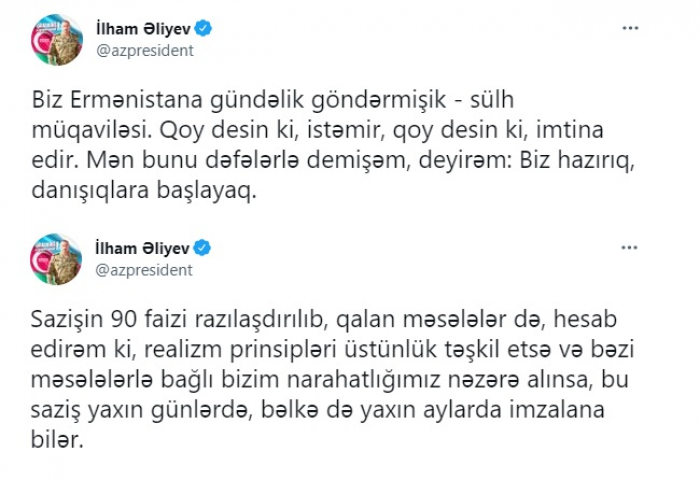 In the first tweet, President Aliyev said that Azerbaijan and the EU will sign a new agreement in the near future.

“ Ninety percent of the agreement has been agreed. If the principles of realism prevail and our concerns about some problems are taken into account, then, I think that the agreement can be signed in the coming days or months ,” the head of state wrote.

About an hour later, President Aliyev tweeted about a possible peace agreement between Azerbaijan and Armenia. “ We sent an agenda to Armenia – a peace treaty. Let them say that they don’t want it, that they are refusing. I have said many times and am saying again: we are ready to start negotiations. ”

Such repeated views may not be accidental and is a serious message to Armenia. The point is that the signing of the new agreement between Azerbaijan and EU also depends on achieving peace between Azerbaijan and Armenia. Most likely, the new agreement to be signed with the EU will cover the issues of launching a transport corridor from the East to the West and the conditions for goods transportation. The part of this corridor running west from Azerbaijan is likely to be divided into two wings – one from Georgia and the other from Zangazur.

The EU attaches great importance to the launch of both wings in parallel, because if the Georgian corridor is later opened to the Black Sea, the Zangazur corridor will ensure the transportation of goods to Europe by land via Turkey.

In the interview, the Azerbaijani president clearly stated that Europe is interested in the unblocking of transport corridors.

“ The European Union has been attaching tremendous great importance to the transport sector of late. For example, I can say that a very brief visit of Mr. Donald Tusk to Azerbaijan took place two years ago. Despite this, he visited the Alat International Trade Seaport. He visited there, got acquainted with the situation and a presentation was made for him. What does this mean? This is evidence of interest. I should also note that while visiting Azerbaijan, Mr. Charles Michel as head of the European Union, made a trip to the regions of Azerbaijan for the first time. He visited Shamakhi and the Shamakhi Juma mosque. I have a very high assessment of that. This is a wonderful message, a wonderful gesture, especially on the eve of Eid al-Adha. We should appreciate this. The Azerbaijani people should also know this. In Shamakhi, a presentation was made for him about the operation of the Alat International Trade Seaport, the future of the Alat Free Economic Zone and tourism opportunities. In other words, the transport sector is of great interest in Europe. The European Commissioner for Enlargement, Mr. Varhelyi, who recently visited Azerbaijan, also went to see the Alat Trade Seaport. The European Union not only recognizes Azerbaijan as an important transport and logistical center, but can also count on our potential ,” President Aliyev.

Given the aforesaid, it can be concluded that the president referred to the will of Azerbaijan, by stating that 90 percent of the agreement with the EU has already been agreed upon, and the remaining 10 percent will depend on the launch of the Zangazur corridor. The EU's interest in signing this agreement means that it will influence Armenia to start peace talks with Azerbaijan.

Armenia is exerted pressure not only through Europe, but also through Russia. Being aware of Yerevan’s intention to avoid a constructive platform, President Aliyev has developed a combination in which both Europe and Russia take a position that meets the interests of Azerbaijan. This situation generally deprives Yerevan of maneuvering opportunities.

President Aliyev also stated that Azerbaijan and Russia are currently working on seven roadmaps: “Each roadmap addresses a specific area and there are good results in each area. This time we discussed more trade, economic, transport and humanitarian issues. As for transport issues, of course, we discussed both the previously agreed issues, the North-South transport corridor, its prospects and the situation that has evolved after the war, including the Zangazur corridor and the post-conflict period. There is no disagreement in our approaches. We, Russia and Azerbaijan, believe that the war is over, that the conflict is over. No revanchist tendencies should be allowed in Armenia and there should be peace in the region from now on.”