Turkey's defense industry is developing very fast, we also benefit and will benefit from it - Azerbaijani President 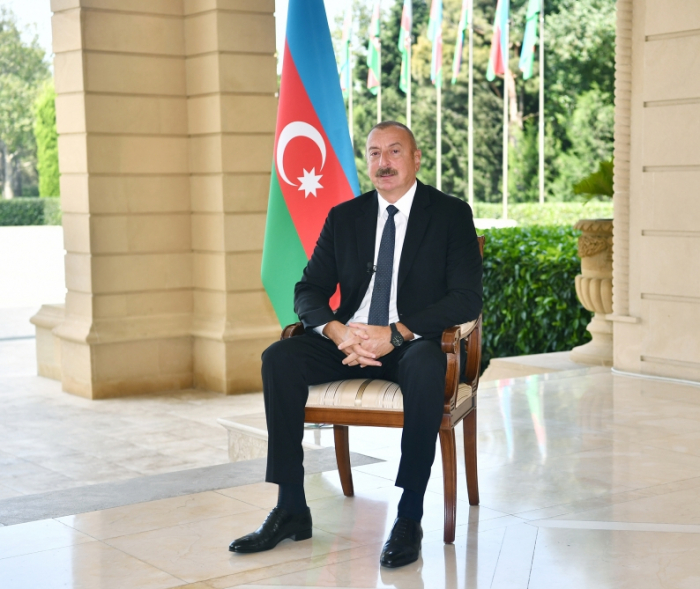 “In the early hours of the second Karabakh war, the resolute statements by my dear brother Recep Tayyip Erdogan played a great positive role. He said that Turkey stands by Azerbaijan, that Turkey provides and will continue to provide political and moral support to Azerbaijan in its just cause. That meant a lot. Because it prevented many from interfering. It was impossible to predict how some countries would behave,” said Azerbaijani President Ilham Aliyev in his interview with CNN Turk TV channel.

The head of state said: “The political position of some countries during the second Karabakh war shows that they were on the side of Armenia. They were on the side of the forces of evil, on the side of the occupier, the oppressor, the savage. No explanations or words based on logic affected their position. They did not want to see the real truth and accused us, as if we were the occupiers. I said that we were fighting on our own land. The UN Charter gives us this right. Every country can defend itself, and this right has been granted to us by the United Nations. Nevertheless, there was a vicious slander campaign against us. We know who was behind it. Therefore, the statements of the President of Turkey and other high-ranking officials – defense, foreign ministers, the speaker of parliament – deterred many, of course. Of course, modern weapons purchased from Turkey, including the UAVs, greatly facilitated our work and prevented many casualties. Because if we hadn’t had those weapons, our work would have been more difficult and there would have been more martyrs, of course. However, we received not only attack UAVs from Turkey, but also other weapons – “Hurricanes”, military vehicles, “Cobras”. In other words, there are many weapons, and this process continues. Turkey's defense industry is developing very fast, and, of course, we also benefit and will benefit from it.”