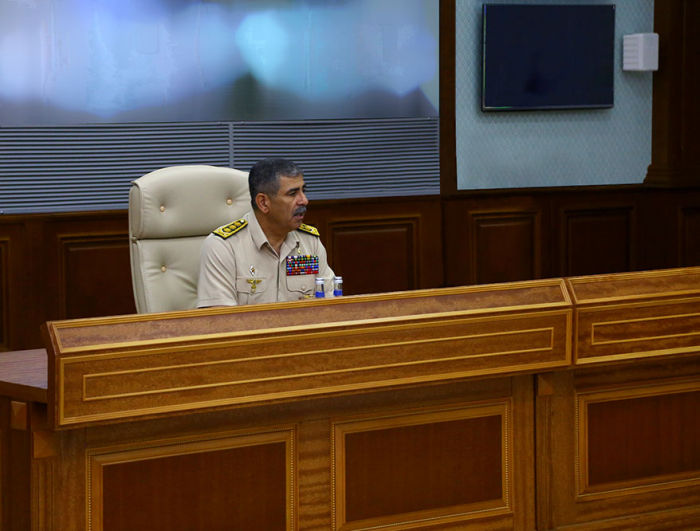 On August 30, the Minister of Defense Colonel General Zakir Hasanov held an official meeting at the Central Command Post. Deputies of Minister of Defense, Commanders of types of troops, Chiefs of Main Departments, Departments, and Services of the Ministry attended the meeting. Commanders of the Army Corps and formations stationed in the liberated territories and other officers were also involved in the meeting held via video communication, AzVision.az reports citing press service of the Azerbaijani MoD.

Having brought to the attention of the meeting participants the tasks assigned to the Azerbaijan Army by the President of the Republic of Azerbaijan, Supreme Commander-in-Chief of the Armed Forces, Mr. Ilham Aliyev, the Minister of Defense noted that the reforms carried out in the Azerbaijan Army will further be continued.

The Minister of Defense congratulated the Turkish Minister of National Defense and Chief of the General Staff, as well as the heroic Turkish soldier on the occasion of 30 August Victory Day and the Turkish Armed Forces Day.

Having analyzed the situation on the Armenian-Azerbaijani state border and in the territory of Azerbaijan, where the Russian peacekeeping contingent is temporally deployed, the Minister of Defense instructed to pay special attention to the conduct of practical training on the activities of units and control points, the clarification of combat plans and the aspects of logistical support to provide an immediate and adequate response to the provocation of the opposing side and to maintain the combat capability of the troops and the combat readiness of the military personnel at a high level.

Regarding the planned activities in the Azerbaijan Army, Colonel General Z.Hasanov gave relevant instructions on organizing military service, clearing mines and unexploded ordnance, creating military infrastructure, laying mountain roads, and keeping them in constant working condition in the liberated territories. The Minister stressed the importance of paying special attention to discipline, safety, and fire safety rules, as well as to the further improvement of the medical support of servicemen.