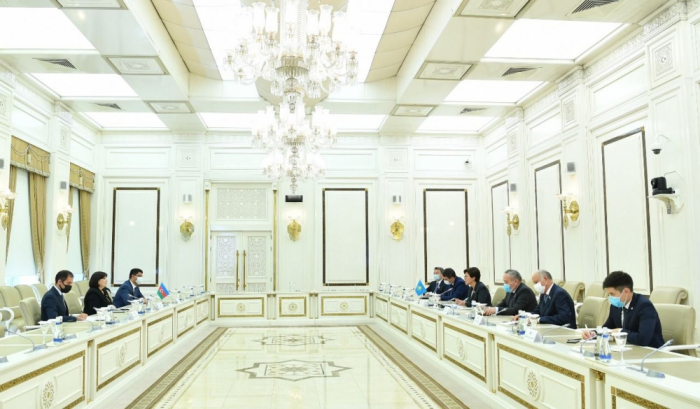 Speaker of the Azerbaijani Milli Majlis Sahiba Gafarova has met with a delegation led by Chairman of the Committee on Foreign Affairs, Defense and Security of Mazhilis of Parliament of the Republic of Kazakhstan Aigul Kuspan.

Speaker Sahiba Gafarova hailed relations between the two friendly and fraternal countries. She noted that these ties that have ancient historical roots were even more strengthened by national leader Heydar Aliyev and the first President of Kazakhstan Nursultan Nazarbayev after the two countries have gained independence.

Speaker of Milli Majlis Sahiba Gafarova highlighted Azerbaijan’s victory during the 44-day Patriotic war and the new situation emerged in the region.

Aigul Kuspan praised the development of cooperation between the two countries in the economic, cultural and humanitarian areas. She congratulated Azerbaijan on the victory in the Patriotic war and shared her impressions about the visits to Shusha and Fuzuli.

During the meeting, the sides also exchanged views on other issues of mutual interest.