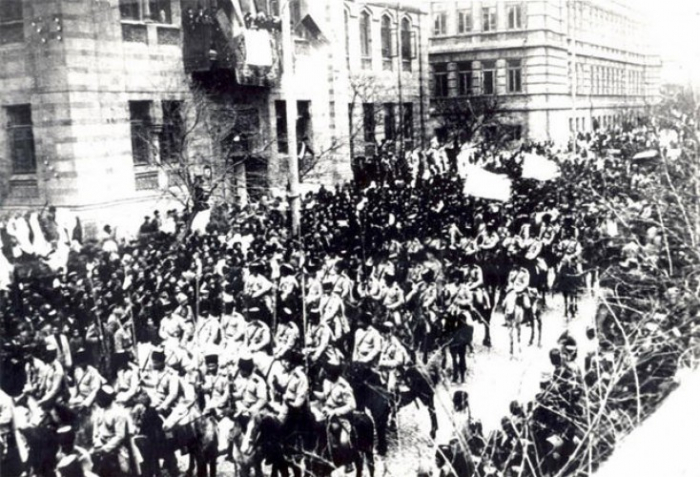 On September 15, Azerbaijan marks the 103rd anniversary of Baku’s liberation from the Bolshevik-Dashnak occupation.

On this day in 1918, the Islamic Army of the Caucasus, which included the Azerbaijani corps, entered Baku, liberating the city from the Bolshevik-Dashnak occupation.

The liberation of Baku is an event of exceptional importance for the Azerbaijani-Turkish friendship and brotherhood.

Despite that during 70 years of the Soviet rule, this event was purposefully explained in an erroneous context, the Azerbaijani people never forgot the heroism of Turkish soldiers.

On September 10, 1918, Nuru Pasha, an Ottoman general in the Ottoman army, took direct control over the liberation of Baku. By order of Nuru Pasha dated September 10, 1918, the command of the Eastern Front and the Northern Group belonging to it were liquidated, and the movement of all formations at the front was directly entrusted to the command of the Islamic Army of the Caucasus.

In an order dated September 13, 1918, sent to the fighting divisions by the command of the Islamic Army of the Caucasus, it was stated that an offensive on Baku will start on September 14 at 02:00.

About 8,000 Ottoman soldiers and the Azerbaijani forces consisting of up to 7,000 people gathered to take part in a decisive offensive on Baku.

At 02:00, the fifth Caucasian division began to advance in the direction of the Heybat-Balajari railway. At 03:00, the first line of Baku’s defense was captured, and at 06:00 - the second line.

The enemy was destroyed by artillery fire. The 56th regiment, who became the protagonist of the offensive, captured the strategic heights and moved forward pursuing the enemy. The 15th regiment takes over Balajary slopes, and the Mashtagha squad from this regiment captured Sabunchu, and the people's volunteers captured Keshla station. Evading direct confrontation, the Armenians engaged in fighting in city blocks and houses, as if they wanted to repeat the March massacre.

On September 14, General Densterville and the government of the Central Caspian dictatorship, and Baku Commissars left Baku.

On September 15 in Ganja in the first issue of the "Azerbaijan" newspaper, the news about the liberation of Baku was published: "Telegram of the commander of the Caucasian Islamic army Nuru Pasha to the Azerbaijan Democratic Republic: "Bismillah-ir-Rahman-ir-Rahim! At the beginning of 09:00 on September 15, 1918, the city of Baku was liberated by our heroic army."

After the liberation of Baku by the Caucasian Islamic army, on September 17, the government of the Azerbaijan Democratic Republic moved from Ganja to Baku. Thus, the main stage of state building began in Azerbaijan.

On September 18, the parts of the Caucasian Islamic army stationed around the city entered Baku. The Azerbaijani Turks, who were the real rulers of the city, warmly welcomed the victorious army as a savior.

Thus, the independence of Azerbaijan was ensured and the domination of Armenians and Bolsheviks in Baku and surrounding areas was terminated. About 2,000 soldiers of the Caucasian Islamic army were killed in the military operation to liberate Baku.

The liberation of Baku from the Bolshevik-Dashnak occupation is one of the most glorious pages in the history of Azerbaijan of the XX century.

Despite the fact that many years have passed since those events, the brotherly help of the Turks is never forgotten, it has always been remembered and will be remembered by the Azerbaijani people with a sense of gratitude.