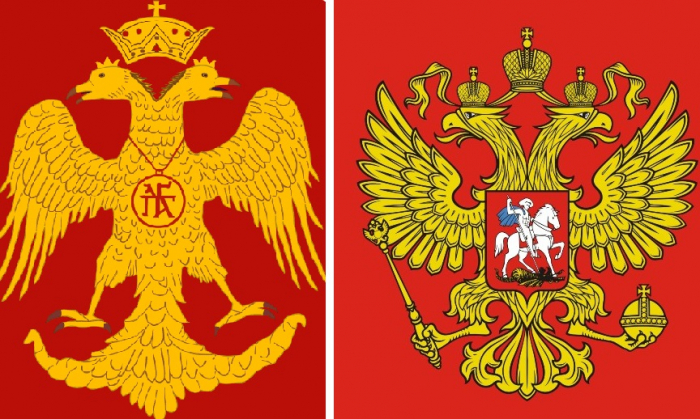 Russia’s policy towards the South Caucasus arouses mixed feelings in the Azerbaijani public. In particular, Russia’s continued arms supplies to Armenia and its attempts to keep separatist ideas alive in Karabakh spark anger and such questions as “What does Russia want?!”. To realize Russia’s desire, there is a need to take a look at the period when the dominants defining the country’s statehood ideology and geopolitical claims emerged. As Kozma Prutkov said, “Behold at the root!”

When Russian tourists saw the double-headed eagle – a symbol of the Byzantine Empire – while touring Istanbul, they were astonished and said: “This is our eagle!” They are absolutely right – the Russian Empire… sorry, the double-headed eagle depicted in the coat of arms of the Russian Federation is the same one – the symbol of the Byzantine Empire.

The ideological foundation of the emerging Russian state was laid after Sophia’s death, under the influence of the “dowry” she brought. It was the theory of “Moscow, as a third Rome”.  According to the theory, the first and second Roman empires (the second was called Byzantium under the name of the Roman Empire) "collapsed because of their sins, the third remains standing, and the fourth will not be there." Based on this idea of Abid Filofey, Vasily III (Sophia Paleolog and Ivan III's son, Ivan the Terrible IV's father) was considered as the same as the legendary Byzantine emperor Constantine.

Later, the “third Rome” theory became the main national-political ideology that united the Russian lands around Moscow. During this period, the myth of the “Monomakh's Cap” began to emerge – as if the Russian tsars’ headdress, the symbol of their power, was given to them by Byzantine Emperor Constantine IX Monomachus.

In all cases, the theory of the "Third Rome" has been strengthened and found its way to Russia’s morality and literature along with political philosophy. According to this theory, considering the biblical principle of the prophet Daniel's "Translatio empire", Russia was assigned with the mission of the world kingdom. The question was: Who should be the guard and supporter of Christians in the world now?

But it brings up a very serious flaw in the theory: It is not possible to call Byzantium "Second Rome." Byzantium was not the successor of the Roman Empire, but the antipode. In fact, if we check the history of geopolitical codes, the roots of today's Russia-West confrontation go back to the Byzantine-Roman conflict.

Nihil nova sub soli. The processes that have happened since the division of the Roman Empire in 330 until today are almost nothing more than the change of the same model in the arrow of time. For example, the US-USSR confrontation was as the same as the Roman-Byzantine confrontation in terms of geopolitical codes. Zbigniew Brzezinski's description of the United States as the second-largest global superpower after the Roman Empire is not unfounded. The United States is really the Second Rome standing in front of the Second Byzantium. But since we are not interested in this story, let's go back to the newly formed period of the Second Byzantium.

The newly-formed Russian state undertook a historic mission considering itself as the "Third Rome," in other words- the "Second Byzantium”.

This mission did not only consider being the patron saint of Orthodox Christians all over the world but also struggling against the Muslim-Turks in the political characteristics of Byzantium. Therefore, the Russo-Turkish wars have practically started since the period when the Russians considered themselves as the "Third Rome" ("Second Byzantium") (1568) and lasted for 350 years - until 1918, when both empires collapsed. This process was in fact a continuation of the Ottoman-Byzantine struggle in another form.

It would be naive to think that this struggle is over, or it will end. Hence, Russia must first abstain from the role of "Second Byzantium" (the spiritual heritage of Byzantium). But on the contrary, Russia is taking over this burden more. In the twentieth century, the confrontation between the Second Byzantium and the Second Rome was a priority. Nowadays, changing global conditions lead to the re-emergence of the geopolitical codes/

Byzantium and the Caucasus

The South Caucasus is an extremely interesting place where a large centralized state could not be established or strengthened. For this, you need a large plain area. The mountainous and complex terrain, such as the South Caucasus, has always been the periphery of great empires, a place where interests collide and are seen as a buffer zone. In such places, local forces can easily emerge, and with the support of relief and nature, they can withstand great forces. And in most cases, another great power tries to take advantage of the factor of their existence and resistance. We have observed this role of the South Caucasus for the first time in the Byzantine-Sassanid geopolitical confrontation. In fact, both empires tried to take advantage of Caucasian Albania in the fight against the other in accordance with their interests, and our predecessor tried to maneuver behind these two empires.

Besides, as the heads of the two old empires were involved in this struggle, the young Bedouin state brought both of them to their knees, put an end to the existence of the Sassanids, and this time the South Caucasus became a significant wing of the Byzantine-Arab struggle. We usually study the Khurram movement as a heroic saga, although it can also provide important clues in terms of understanding the geopolitical history of the region. Undoubtedly, without the secret support of Byzantium, the local resistance against the Caliphate would not have lasted so long ...

In other words, considering the South Caucasus as a wing where important interests collided had been in the genetic code of the Byzantine idea of statehood, and these codes were passed onto his successor through the hereditary mechanisms of history. For Byzantium, that period ended with the arrival of the Seljuks, but then a new code was written in the gene of statehood. The succession, which firstly started in 1064 in the form of Byzantine-Seljuk, then ended in 1453 with the conquest of Istanbul in the form of Byzantine-Ottoman and was restored in 1568 in the form of the Russo-Ottoman wars, when it declared itself the successor of Byzantium, remained until 1918.

An interesting situation arises: if we admit that Russia is the successor of Byzantium (as they themselves think), it turns out that the geopolitical codes of the war, which started when the Seljuks came to the region, have been going on for more than a thousand years with different mutations.

To comprehend the essence of the ongoing processes, we favor considering this issue from this perspective – from the point of geopolitical codes. After the Byzantine Empire was defeated by the Ottomans, the Byzantine spirit reincarnated in Russia and continued its struggle in new directions. In its struggle against the Ottomans, Russia has always considered the South Caucasus an ‘important wing’ and has never sought to move beyond it. Frankly speaking, Russian troops that began to leave San Stefano in the morning, where the 1878 Treaty of San Stefano was signed, could rest on the shores of the Strait in the daytime and nothing – except for European countries that had already become a global power and were embodying the genetic codes the Western Roman Empire – could prevent them from doing that. During the Crimean War 25 years ago, Europe made Russia understand that no matter how much it hated the Ottomans, the strengthening of II was even more undesirable. Therefore, in 1878, Russia did not have enough courage to enter Istanbul for fear of Europe. Russia could invade Tabriz many times by crossing the South Caucasus. Nevertheless, the states carrying the genetic codes of the Western Roman Empire did not give Byzantium II this opportunity.

Thus, the South Caucasus was recognized as a place connecting the boundaries of the areas where the three geopolitical codes (Rome, Byzantium, and Turkic) prevailed. Nothing has changed today. The struggle has gone on, goes on and will go among the trio throughout history. The concept of "Armenian" is out of the question here, there never was. History must be falsified – no Armenian factor could be seen in the Byzantine-Sassanid, Byzantine-Arab, Seljuk-Byzantine and Ottoman-Byzantine struggles. Armenians began to appear only after Byzantine II decided to wage its old struggle with the Turks in the new era and on the eastern flank of the Black Sea. They have never been the subject of this historical struggle. Millennial processes are going on the same path.