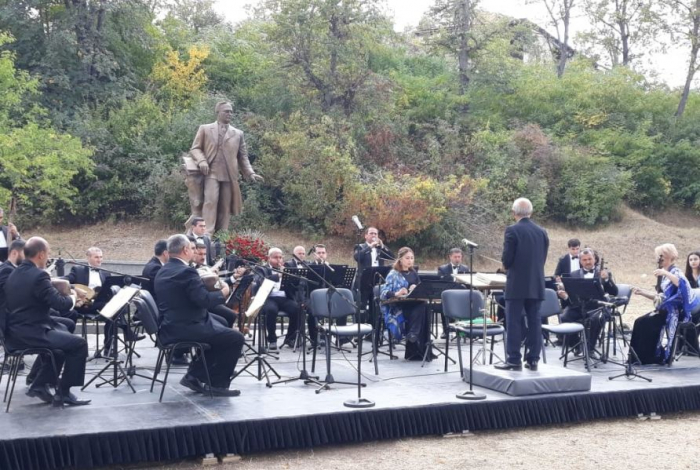 Azerbaijan is marking the Day of National Music and the birthday of Uzeyir Hajibayli, genius composer, founder of professional Azerbaijani music, musicologist, public figure, the author of the first opera in the East, on September 18, AzVision.az reports.

In accordance with the decree of the national leader Heydar Aliyev, a series of events are held annually in this regard in different regions of Azerbaijan.

The birthday of the outstanding composer is also marked by the opening of the International Music Festival named after him.

The rich program of the XIII Uzeyir Hajibayli International Music Festival, to be held on September 18-24, will include performances of Azerbaijani art groups and soloists, as well as musicians from the US and Poland.

One of the first concerts within the festival will take place in Shusha, given that by the corresponding order of the President Ilham Aliyev, this city was declared the cultural capital of Azerbaijan.

A concert of the Azerbaijan State Song and Dance Ensemble named after Fikrat Amirov under the direction of People's Artist Aghaverdi Pashayev has been organized on the Day of National Music in Shusha with the participation of famous soloists.

During the concert, the music masterpieces of Uzeyir Hajibayli will be performed.

Holding such a festival in the city of Shusha, liberated from the Armenian occupation after 29 years, was the dream of every Azerbaijani, and this dream has become a reality.

For many years, Azerbaijani historical and cultural monuments have been destroyed in the Azerbaijani lands previously occupied by Armenia, including Shusha, where the busts of Uzeyir Hajibayli, as well as other outstanding cultural figures of the country – poetess Khurshidbanu Natavan and singer Bulbul were subject to the Armenian vandalism.

Even before the Second Karabakh War, President Ilham Aliyev said that after the restoration of the territorial integrity of Azerbaijan, the busts of Hajibayli, Natavan and Bulbul will be re-installed in Shusha. These words of the President of Azerbaijan have already become reality. The busts were re-installed in the ancient city and welcome its guests.

Moreover, a new monument to Hajibayli has been installed in Shusha after its liberation.

The first monument to the composer in Shusha was installed in 1985 on the occasion of the 100th anniversary of his birth. The monument, created by the sculptor Ahmad Salikov, was completely destroyed in 1992 during the first Karabakh war as a result of Armenian vandalism.

On the instructions of Azerbaijani president, a new monument to the composer was made. The bronze statue was installed in its former place in Shusha with the support of the Heydar Aliyev Foundation. The authors of the monument are sculptors Aslan Rustamov, Teymur Rustamov and Mahmud Rustamov.