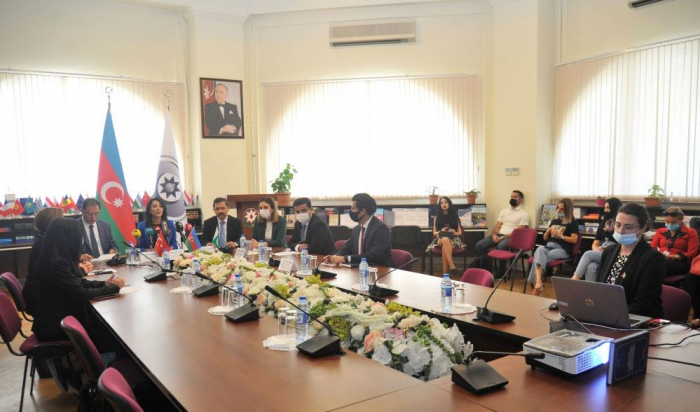 The delegation of the Association of Ombudsmen of the Organization of Islamic Cooperation (OIC) held a press conference in the Azerbaijani Ombudsman's Office on Sept.18, AzVision.az reports citing the office.

The event participants discussed the facts of war crimes committed by Armenia against Azerbaijan, including destruction of cultural monuments, as well as the consequences of the ecological terror committed by the Armenian side in the previously occupied Azerbaijani territories.

Speaking at the event, Azerbaijani Ombudsperson Sabina Aliyeva again expressed her gratitude to Turkey and Pakistan for providing moral support to Azerbaijan during the last year’s 44-day Second Karabakh War [from late Sept. to early Nov.].

Seref Malkoc, President of the OIC Ombudsmen Association, thanked Aliyeva for the invitation to visit the country.

According to Malkoc, based on the results of the mission to investigate the facts of crimes committed by Armenia in the previously occupied Azerbaijani territories, a report will be prepared, which will be sent to international organizations.

He also stressed the importance of expanding ties between the ombudsman’s offices of the countries.

Advisor to the Secretary General of the Association Muhammad Javed Ghani shared his impressions of the trip to the territories liberated from Armenian occupation [in the Second Karabakh War].

According to Ghani, the members of the delegation witnessed destructions, annihilation of religious and cultural monuments by Armenia in the previously occupied territories.

During the press conference, the results of monitoring related to the facts of vandalism of Armenia in relation to social facilities, cultural and historical monuments in the previously occupied territories, as well as the results of the mission to investigate the facts, in particular the collected evidences, were discussed.

At the end of the press conference, the OIC Ombudsmen Association issued a statement on the fact-finding mission results.