Ilham Aliyev: "Liberation of Sugovushan was of utmost importance" 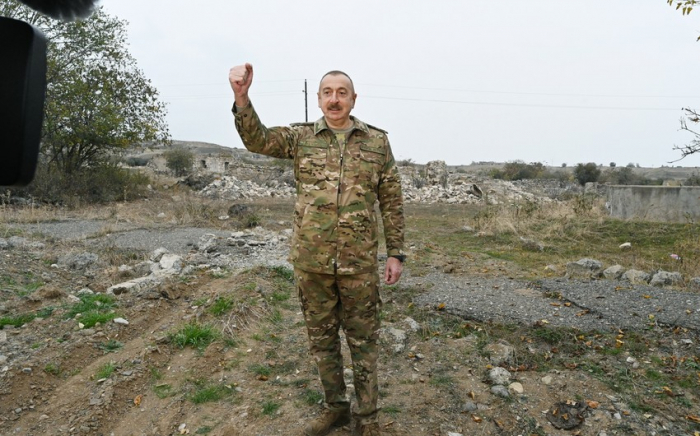 "One year ago, on 3 October, Sugovushan settlement was liberated from occupation. It was a very significant event. It was a great success, a great victory to liberate the strategic settlement from occupation in the first days of the war. During the liberation of this settlement, we had martyrs and wounded servicemen. May Allah rest the souls of all our martyrs in peace and grant healing to the wounded." Victorious Commander-in-Chief, President of the Republic of Azerbaijan Ilham Aliyev said during his speech after raising the Azerbaijani flag in Talish village and Sugovushan settlement.

The head of the stated spoke about the great strategic importance of Sugovusgan settlement:"The location of this settlement played an important role in the subsequent course of the war, and the fact that the settlement was in our hands gave us an advantage in our future operations. Naturally, the enemy probably knew, of course, that we would move in this direction. Talish village and Sugovushan settlement were liberated on the same day, on 3 October of last year. Very strong fortifications had been built here. There were several lines of defense. The enemy had all strategic heights, the heights leading to the settlement. The Azerbaijani Army showed great heroism and self-sacrifice in liberating Talish and Sugovushan as a result of fierce battles. Another important feature of the liberation of Sugovushan and Talish was that after the liberation of the first villages – the first six villages were liberated on the first day of the war, on 27 September – no settlements were liberated until 3 October. There were natural reasons for that. There were preparations, maneuvering and fierce battles. However, the liberation of more settlements after the victories on the first day of the war certainly gave our army and people additional strength and morale, and the liberation of eight villages on the seventh day of the war, including the liberation of these villages in the former Nagorno-Karabakh Autonomous Region, gave us a tremendous advantage."