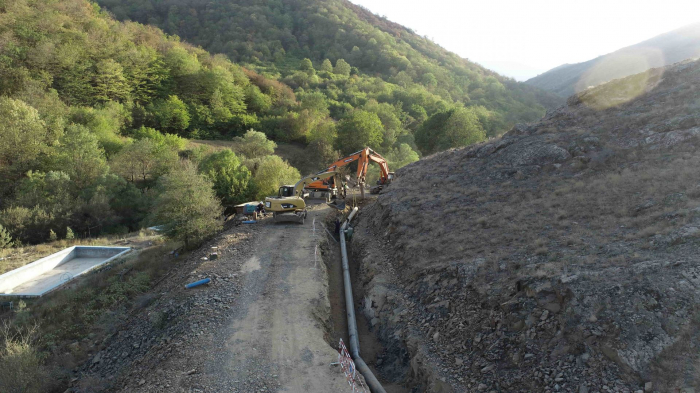 In accordance with the instructions of the President of Azerbaijan Ilham Aliyev, Azersu OJSC is implementing a new project in the field of sustainable water supply in the city of Shusha, AzVision.az reports citing OJSC.

According to OJSC, after the liberation of the city of Shusha, measures were immediately taken to ensure the city’s water supply and its vital facilities.

According to the Coordination Headquarters, created in connection with the centralized solution of issues in the Azerbaijani territories liberated from Armenian occupation, to provide the city of Shusha with an uninterrupted supply of high-quality drinking water, the first stage of the project envisages the construction of a main water pipeline and a reservoir, as well as the reconstruction of a part of the inner-city network.

At present, work continues on replacing the 5.3-kilometer part of the Kichik Kirs-Shusha main water pipeline, which was carried out in the 1980s and became unusable, with steel pipes.

In accordance with the project, the implementation of which began in August, 50 percent of the work planned for the main water supply system has been completed in a short time. First of all, a part of the water pipeline was built, passing through the territory of Victory Road [commemorating the path which was used by Azerbaijani soldiers for liberating the city] and an electrical substation.

At present, the construction of the main line is carried out in conditions of difficult terrain in areas that complicate the movement of equipment.

On rocky areas, a track is first laid for the free movement of equipment, which will later be used as a road.

In the areas where the pipeline will pass, special equipment is used for crushing rocks and drilling wells, which are filled with sand in accordance with building codes and are used for placing and welding pipes.

Each weld is inspected according to specifications and the welded parts are insulated to protect against corrosion. A warning tape is stretched along the entire route, taking into account the risk of pipeline damage if drilling on site in the future.

At the first stage of the project to ensure sustainable water supply to Shusha, two reservoirs with a capacity of 500 cubic meters each will be built on the territory of the city, and a six-kilometer section of the inner-city network will be reconstructed.

In accordance with the General Plan, at the next stage of the project, the drinking water and sewerage networks of the city will be completely reconstructed, and a wastewater treatment plant will be built.

Taking into account the location of the population and the prospects for the development of tourism in the future in the city of Shusha, it is planned to use the Zarysly river as an alternative source of water. In this regard, research and design work has begun at the Sukanal Research and Design Institute of Azersu OJSC.

According to the initial assessment, a water intake and a reservoir will be built in the Zarysly river bed, and water will be supplied to Shusha through a pumping station. Besides, adjustment work was carried out on the intra-city network.