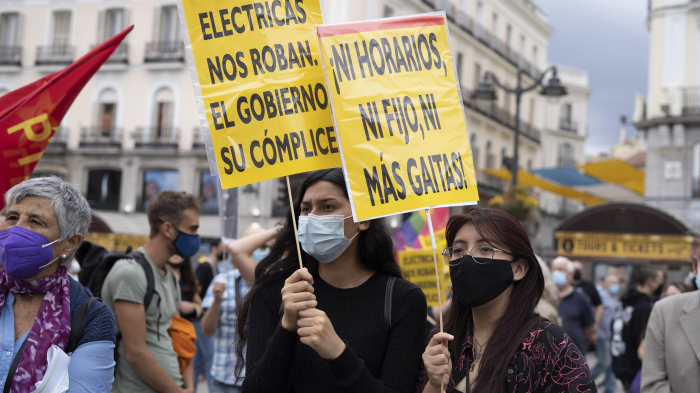 At the end of this month, much of global attention will fall on Glasgow, Scotland. World leaders from close to 200 countries will convene there at the “COP26” international climate summit in a bid to lay down new commitments to curb greenhouse emissions and reckon with a warming planet. Scientists have made clear that a climate that sees temperatures rise 1.5 degrees Celsius above preindustrial levels will be marked by increasingly extreme weather events, while rising sea levels, droughts and other phenomena displace whole communities.

According to a report this summer from the U.N. Intergovernmental Panel on Climate Change, humans can unleash only about 500 additional gigatons of carbon dioxide — the equivalent of about 10 years of current global emissions — to even have a chance of hitting that target. In other words, COP26 is happening not a moment too soon, as the urgency to transition away from carbon-intensive fossil fuels grows all the more acute. Alok Sharma, the designated British president of the summit, has said rich powers must use the moment to “consign coal to history.”

But, in the short term, other pressures may stall the momentum toward such action. In various parts of the world, governments are reckoning with a severe rise in energy prices. Surging costs for natural gas and shortages of coal have led to significant spikes in the price of electricity — tripling from the previous year in some European countries. The prospect of a cold winter with skyrocketing heating bills may weigh far more heavily on most people’s minds than the distant, abstracted calculations that guide climate action.

“The energy supply crisis is showing how difficult ending the dependence on fossil fuels would be,” Bloomberg News noted. “China is driving demand for coal as it tries to secure the fuel to keep the lights on and factories running. Europe, which remains reliant on gas supplies from Russia, is seeing its companies seeking more coal for electricity generation ahead of winter with gas prices at record highs and supply hard to come by.”

In China, authorities have mandated the rationing of the power supply throughout several of the country’s provinces. Economic forecasters warn that the subsequent loss of industrial output may have an impact that ripples through a global economy already snarled by supply chain issues. “China’s power shortages have global implications,” Ting Lu, chief China economist at global financial services group Nomura, told the Financial Times. “Global markets will feel the pinch of a shortage of supply from textiles, toys to machine parts … [and] very likely result in a shortage of goods for Thanksgiving and Christmas.”

The looming energy crisis in Asia, Europe and even possibly the United States is the product of a complicated set of factors, ranging from a dip in hydro- and wind-generated power to a spike in energy demands as industries whirred back into action after the pandemic-induced downturn. But skeptics of the broader climate agenda espoused by the convening powers at U.N.'s COP26 summit see the current moment as a warning to governments about the inherent risks of the current energy transition. In Europe, some countries have scrambled to counteract protests over rising prices, while natural gas suppliers in Russia, Qatar and elsewhere may gain all the more leverage as colder temperatures set in.

Hungarian Prime Minister Viktor Orban — a constant critic of E.U. liberalism — blamed the rise in prices on the European Union’s green agenda. He’s not alone in voicing his disquiet.

“We need to now recognize that decarbonization will only work when you’ve much more fully decarbonized,” Bim Afolami, a Conservative member of Britain’s parliament, told Bloomberg News. “This shows being in a transition phase — a half-in, half-out approach — leaves you vulnerable in this way.”

“The current European Commission has turned energy policy into a mere subset of climate policy, with little attention paid to supply security or energy affordability,” energy analyst Brenda Shaffer wrote in Foreign Policy. “While major new sources of natural gas have been found in proximity to Europe — in the Eastern Mediterranean, for example — European leaders have bowed to activist pressure and not seriously pursued any of these newly available sources.”

But climate action advocates see the current volatility as evidence for doubling down on the transition to renewable energies. “In the long run, we see that the economy is decoupling from its dependence on fossil fuels,” Tom Sanzillo of the Institute for Energy Economics and Financial Analysis told Today’s WorldView, adding that policymakers and business leaders have to get to grips with the “managed decline” of the fossil fuel industry.

The data shows that renewable energy in its various forms is getting inexorably cheaper to produce. A new report from the Centre for Research on Energy and Clean Air found that electricity generated from zero-carbon emission sources helped reduce Britain’s and the E.U.'s gas bill by tens of billions of dollars. “Skyrocketing prices is an incentive to get out of fossil fuels,” Sanzillo said.

Leading European politicians preparing for COP26 concur. They believe that the transition to more renewable energies will in the long run help protect European customers from the vagaries of oil and gas markets. “The wrong response to this would be to slow down the transition to renewable energy,” Frans Timmermans, the E.U.'s climate chief, said at a meeting of environmental ministers this week. “The right response is to keep the momentum and perhaps even look for ways to increase the momentum.”

Secretary of State Antony Blinken echoed that rhetoric. “We’re in the midst of a lengthy transition to renewables of various kinds, away from fossil fuels,” he said during an interview Wednesday. “During that transition you can have challenging, bumpy patches before you actually get to the point where you have all of these renewable energies that are online and able to fill the gap.”

Ishaan Tharoor is a columnist on the foreign desk of The Washington Post.